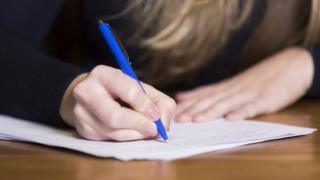 School transfer tests in Northern Ireland have been cancelled, four days before thousands of children had been due to sit the first exam.

The tests, sometimes called the 11 plus, are taken by many children in the last year of primary school - Year 6 or P7 - to help decide which secondary school they will go to in the following year.

They are organised and run by two different organisations - AQE and PPTC - with both running the tests on different dates.

About 8,000 children had been due to take the first AQE test on Saturday 9 January, but both AQE and PPTC have said their tests will no longer take place this month.

AQE has now said it's planning to go ahead with a single test paper on Saturday 27 February. So far, the PPTC has said the responsibility falls on schools to ensure that their admissions criteria provides for this situation.

More about schools and lockdown

Schools across UK close to most pupils

Schools call for NI transfer test to be cancelled

How do you feel about more home learning? 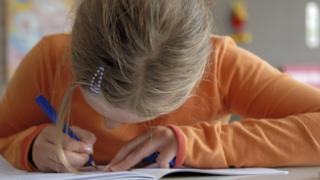 What is the transfer test?

The tests were originally due to be taken in November, but were delayed to give children more time to catch up on work they missed during last year's lockdown.

Some head teachers had already called for the tests to be suspended this year because of the impact of coronavirus.

But many children, parents and teachers who have spent months preparing for the tests, wanted them to go ahead. 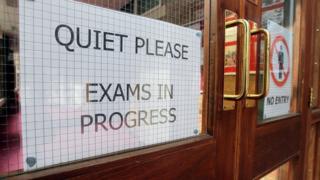 The PPTC said it accepted that "the decision may be disappointing to many children who would have welcomed the opportunity to take the assessment".

It added: "We wish all children well in their future pathways."

Other exams in Northern Ireland 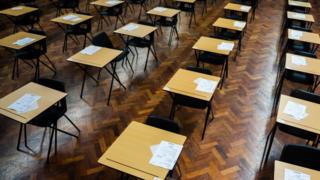 Northern Ireland's ministers have also decided that GCSE, AS and A-level examinations in Northern Ireland will not go ahead this year. However, it's not yet known what alternative arrangements will be put in place.

This summer's GCSEs and A-level exams have been cancelled in England and Wales, while the equivalent tests in Scotland will also not take place.