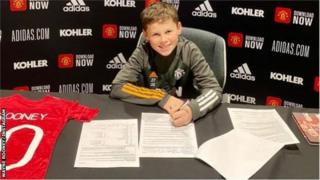 Like father, like son! Following in the famous footsteps of his dad, Wayne, Kai Rooney has signed for Manchester United!

Kai, who is 11, was pictured alongside his dad and mum, Coleen, putting pen to paper on a contract at the famous football club.

Wayne - who played for United from 2004 until 2017 - posted the picture on social media, saying: "Proud day. Kai signing for Man Utd. Keep up the hard work son."

Kai was also pictured holding up a United shirt with the number 10 on the back - the same number his dad wore.

Kai has signed a Premier League academy registration to be part of United's Under-11 team.

How to stay active when your clubs are closed

Earlier this year Wayne posted footage of Kai training and showing glimpses that he could have a future in football.

Kai is the eldest of four sons, with his brothers called Klay, Kit and Cass.

His mum, Coleen, was also pictured at the United signing, she wrote on social media: "Special night... congratulations Kai. I love you and I am so proud of you. Keep trying your best."

Should Kai follow in the path of his father, he will not be too far away from playing senior football - Wayne made his first team debut for Everton when he was just 16, and soon scored a famous goal in the Premier League with his long range winner against Arsenal just before his 17th birthday.