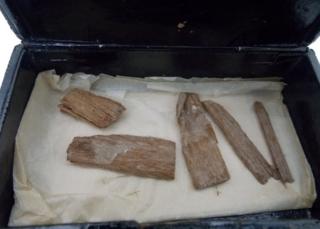 University of Aberdeen
The wood was originally found in 1872

A long-lost Ancient Egyptian artefact, that was once part of the Great Pyramid of Giza, has been re-discovered in a museum in Aberdeen.

The chance discovery was made by a member of staff at the University of Aberdeen during a review of the museum's collection.

The small fragment of 5,000-year-old wood - which is now in several pieces - is said to be "hugely significant".

The piece of cedar is believed to have been used during the pyramid's construction. It was donated to the university in 1946 but then could not be located and was thought to be lost.

The wood was originally discovered inside the pyramid's Queens Chamber in 1872 with two other items.

They are kept in the British Museum, but the wood was missing. 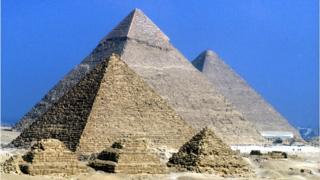 Abeer Eladany, an assistant at the University museum, found the wood stashed away in an old tin while conducting a review of historical items.

Abeer, who is originally from Egypt and spent 10 years working in the Egyptian Museum in Cairo, cross-referenced it with other records.

She said: "It may be just a small fragment of wood, but it is hugely significant given that it is one of only three items ever to be recovered from inside the Great Pyramid.

"The university's collections are vast - running to hundreds of thousands of items - so looking for it has been like finding a needle in a haystack."

Scientific dating of the rediscovered cedar fragment show that the wood is somewhere from the period 3341- 3094 BC. That's pretty old!

Now it's hoped the wood can shed new light on the mysteries of the Great Pyramid.

How were pyramids built? Discovery of ancient ramp may provide answer