Kangaroos can communicate with humans! PA Media
The kangaroos were given a task they couldn't solve

A new study suggests that kangaroos can communicate with humans, meaning our skippy pals from Down Under are cleverer than we previously thought.

However, rather than give up when they couldn't get the food, the kangaroos would look to the researcher and then back to the box, as if they were asking for help.

Some of the kangaroos even started scratching and sniffing at the researcher and then looking back at the box, suggesting they were really trying to communicate. Now, if you have a dog or a cat at home, you might be thinking they do that all the time! This is exactly what surprised the researchers.

Dr Alan McElligott, lead author of the study, said animals seeming to ask humans for help was generally only something that had been seen for those that had been domesticated for hundreds of years.

He said: "Kangaroos showed a very similar pattern of behaviour we have seen in dogs, horses and even goats when put to the same test."

How are animals getting on after the Australian bushfires?

Why do kangaroos only live in Australia? 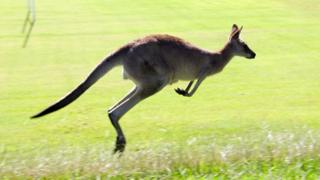 The study was done with just 11 kangaroos from various species, but McElligott said it was the first research of its kind conducted on marsupials.

Dr Alexandra Green, a co-author of the study, said: "They aren't considered as cuddly or cute as koalas, so sometimes kangaroos get a bad rap."

"Hopefully, understanding that they've got these complex, cognitive skills will represent them in more positive light as well."

However, Green said the research did not mean anyone should approach kangaroos in the wild, hoping to have a chat with them:

"You most definitely should not. You read a bit about kangaroos attacking people, so yeah, I wouldn't recommend it."

Can you see the owl in this photo? Not many can!