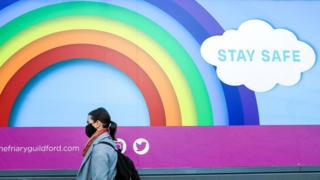 You might have heard people talking about 'new variants' or 'new strains' of coronavirus.

A variant is a different version of a virus - all viruses change and mutate so this is not unusual.

So far thousands of new variants have been found across the world, but health experts are currently focused on versions found in the UK, South Africa and Brazil.

Scientists are studying these mutated versions to understand what makes them different, and whether those differences may make them better at spreading between people, for example, or if it means changes need to be made to the vaccines that have been developed.

But why does a virus change? And should we be worried? Here's everything you need to know.

Why do viruses change? 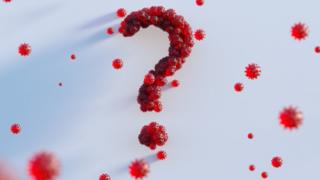 Sometimes when a virus makes copies of itself, it can mutate - or change - a bit. The virus with these changes or mutations is then called a 'variant' of the original virus.

This may sound a little bit scary at first, but as BBC Health Correspondent Nick Triggle explains: "Mutations happen all the time - there have been thousands of variations to this coronavirus since it emerged."

What is a 'mutation'?

A mutation is when the genetic information that's stored inside an organism changes.

Why does a virus change?

Like all living things, including humans and animals, viruses constantly evolve and change.

It is normal for viruses to change and this is what has been happening, and will continue to happen with the coronavirus.

Professor Alan McNally, an expert at the University of Birmingham, described it as "normal virus evolution", adding that "we expect new variants to come and go and emerge over time".

Dr Xand, from CBBC's Operation Ouch said it is "proof of the absolute rule that viruses will change".

"We evolved from viruses, we have viruses built into us and the virus will try and escape our ways of fighting it," he added.

In short: There's nothing strange about a virus changing. 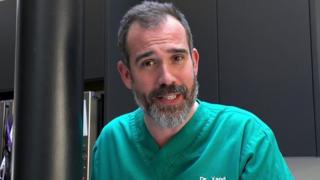 Dr. Xand, from Operation Ouch
So are the coronavirus variants more dangerous?

Scientists are constantly studying the different variants to see how they've changed and how those changes might affect humans who catch that version of the virus.

The UK government even has a special facility, known as Porton Down, where scientists test everything from viruses to chemicals to understand them. Experts there told the BBC in 2019 their job is "to identify ways to prevent, reduce and treat infection."

The newer Covid-19 variants are just like the original version: the risk is highest for people who are elderly or have significant underlying health conditions.

The Prime Minister Boris Johnson told a news conference that the new 'UK' variant "spreads more quickly," and "may be" linked to a "higher" number of patients dying.

Sir Patrick Vallance, the government's chief scientific adviser, added "I want to stress that there's a lot of uncertainty around these numbers and we need more work to get a precise handle on it."

With the new variants, the advice to help you stay safe is the same as before - keep your distance from other people, wear a face covering and keep washing your hands.

The NHS says the best ways to avoid potentially catching and spreading coronavirus is by: 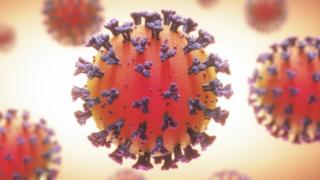 The UK, South Africa and Brazil variants could be easier to catch than earlier versions.

All three have seen changes to their spike protein - this is the part of the virus which attaches to human cells.

BBC health correspondent, James Gallagher said scientists are particularly interested in "the important spike protein" - because it's the part that sticks out from the virus' outer coat and "is the key the virus uses to unlock the doorway into our body's cells".

As a result, these variants seem to be better at infecting cells and spreading. 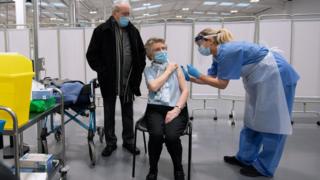 Getty Images
Existing vaccines might not be as effective, but can be changed to provide more protection if necessary
UK variant

The latest research by Public Health England shows that the variant found in the UK is 30% to 50% more likely to pass from one person to another.

Experts think the UK version known as the "Kent" strain started in September and was the reason why the UK went back into lockdown at the start of 2021.

There are 77 identified cases of a coronavirus variant from South Africa in the UK at the moment.

The Health Secretary Matt Hancock said that all the cases in the UK were linked to travel and this variant has not spread between people who haven't been to South Africa or been in contact with someone who has.

"That's why we have got such stringent (strict) border measures in place against movement from South Africa," he said.

The South African and Brazil variants have seen similar mutations in the spike protein and that's why the UK government is taking steps to prevent it spreading.

Flights from South Africa, South America and Portugal to the UK have all been banned. 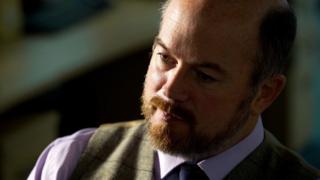 Prof Calum Semple is one of the scientists advising the government, he says he's confident the vaccine will still provide protection for most people
Does it mean a vaccine won't work?

The Pfizer, Moderna and the Oxford coronavirus vaccines were all designed around earlier versions of the virus. But, scientists believe they should still work against the new variants. But, they warn they may not be as effective.

Professor Calum Semple is one of the scientists that help advise the government, he is also a professor of child health and outbreak medicine.

Speaking to Newsround, Prof Semple explained that he and other experts are still looking at all the information they have on the new strains to learn more about them.

He added that for those who have already been vaccinated, he is fairly "confident that the majority will still be protected against the new variants."

And, some early research shows that the Pfizer vaccine might provide protection against the new UK variant.

According to BBC's health correspondent, James Gallagher, mutations to the coronavirus spike protein "can lead to questions about the vaccine".

But this is nothing new with viruses, each year people are given new versions of flu vaccines and James added that, "we may have to regularly update the [coronavirus] vaccines, as we do for flu, to keep up."

Experts say vaccines could be redesigned and tweaked to be a better match - in a matter or weeks or months, if necessary.

London will move into tier three on Wednesday

Do you think schools should close early for Christmas or stay open?