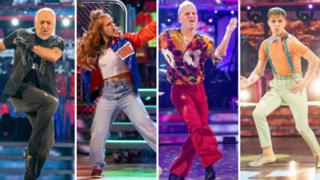 Bill, Maisie, Jamie and Hrvy and their pro partners will battle it out for the Strictly glitterball trophy

There's not long now until we find out who will be the winner of this year's Strictly Come Dancing.

So, who could lift the glitterball trophy?

Just four celebs are left after TV presenter and journalist Ranvir was voted out in last week's semi-final.

Vote: What do you think of the 3D graphics on Strictly this year?

What can we expect from the final?

Strictly has still been as glitzy and as glamorous as ever, despite the challenges of making a big TV dance show during a pandemic.

The final four have been chosen by the public and are ready to lace up their dance shoes and tap, twirl and shimmy their way to victory.

There are going to be show dances, a professional group performance and music from Robbie Williams. 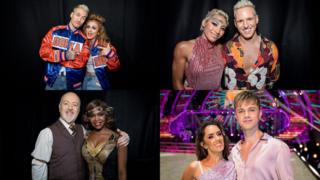 The four final couples will each do three dances; a judges' pick, a show dance and a favourite dance.

All of the 2020 celebs will return to the ballroom for one last time too.

Boxer Nicola Adams and Katya Jones will also be back doing a non-competitive routine.

They made history as the first same-sex couple to compete on the show, but had to leave the competition early when Katya tested positive for coronavirus. 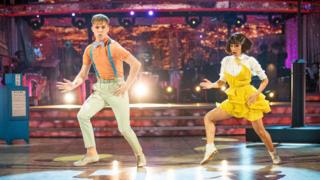 HRVY and Janette will be dancing a Jive for their judges' pick to Faith by Stevie Wonder FT. Ariana Grande.

For their favourite dance they'll perform an American Smooth and for their show dance HRVY and Janette are dancing to Boogie Wonderland by Brittany Murphy. 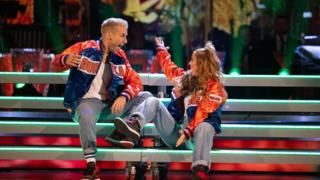 Maisie and Gorka will be dancing the Samba as their judges' pick to Samba (Conga) by Gloria Estefan.

Their show dance will be We Need A Little Christmas by Idina Menzel.

For their favourite dance, Maisie and Gorka will be quickstepping to When You're Smiling by Andy Williams. 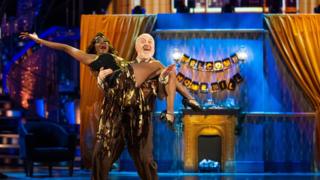 Bill and Oti have chosen a Quickstep to Talk To The Animals by Bobby Darin for their judges' pick.

The Show Must Go On by Queen for their show dance and for their favourite dance they will bringing back their epic routine to Rapper's Delight by The Sugarhill Gang. 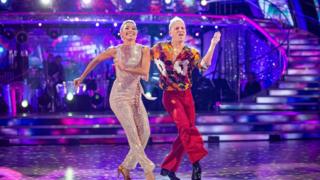 Jamie and Karen will be doing the Charleston to Zero To Hero from Disney's Hercules as their judges' pick.

They'll dance to I'm Still Standing by Taron Egerton for their show dance, and their favourite dance will be to Gonna Make You Sweat (Everybody Dance Now) by C+C Music Factory.

Strictly 2020: Adams' change of heart about being on the show