Chuck Yeager: Who was he and why are people talking about him? 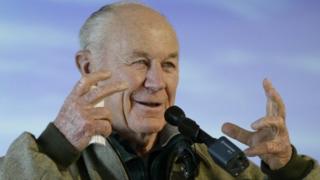 Chuck Yeager was a famous pilot from the US, he is best known for being the first pilot to break the sound barrier in 1947.

He later broke several other speed and altitude records, helping to pave the way for the US space programme. 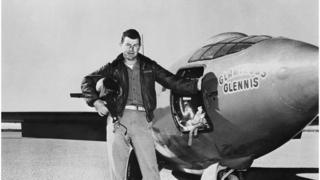 Chuck was born in West Virginia, US, and is one of the world's most famous pilots - so famous that he even has an airport in Charleston, West Virginia named after him.

After his involvement as a pilot in World War Two, Chuck returned home and became a flight instructor and test pilot.

He soon gained attention for his excellent flying skills and was often asked to perform in air shows, where pilots fly jets and perform impressive tricks in the air for crowds below to watch.

It was this attention and recognition that resulted in him being chosen to fly the Bell X-1, the plane that would earn him the nickname as the "fastest man alive" and break the sound barrier. 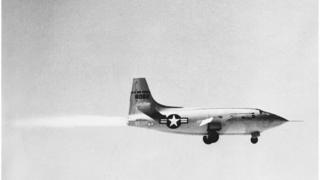 He was inducted into the National Aviation Hall of Fame in 1973.

He got lots of medals for his work and became the the most decorated US pilot ever.

He kept flying in his later years, he even broke the sound barrier again in 2012 when he was 89 years old.

He had a book and a film made about him.

What does breaking the sound barrier mean?

Chuck Yeager was the first person in history to accomplish this on 14 October 1947, with the Bell X-1, nicknamed Glamorous Glennis - a plane that was named after his first wife.

Chuck had managed to gain his speed up to Mach 1, which is the equivalent to 767mph. For comparison, the national speed limit for a car on a motorway in the UK is 70mph - you can imagine he was flying very fast!

The impressive feat has been written in history books ever since, even more impressive that commentators at the time didn't believe a plane could survive the sonic boom.

VE Day: How did you mark the 75th anniversary?