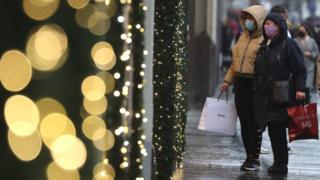 Coronavirus restrictions in 11 council areas in Scotland will be reduced from level four to level three, meaning non-essential shops and other businesses will be able to reopen.

Shops will be able to re-open from 6am on Friday, with other restrictions being lifted at 6pm.

Coronavirus: What are the rules where you live?

More than two million people have been subject to the level four restrictions since 20 November.

The announcement was made by Scotland's first minister Nicola Sturgeon on Tuesday afternoon.

But travel restrictions, banning people in the higher tiers from travelling outside their area, will remain in place.

This means that people outside of cities like Glasgow and Edinburgh - which will stay in tier three - won't be able to travel there to do Christmas shopping.

Ms Sturgeon confirmed that five other local authorities will move down to a lower level from Friday. 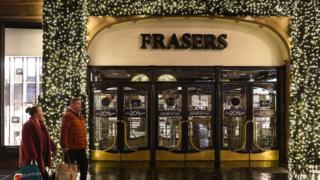 Most people in Scotland still won't be allowed to go to other people's houses.

Ms Sturgeon said: "I know this is really tough - but it remains the most effective way of stopping the virus spreading from one household to another."

On islands like Orkney, Shetland and the Western Isles, which aren't connected to mainland Scotland by road, six people from a maximum of two households are allowed to meet indoors. 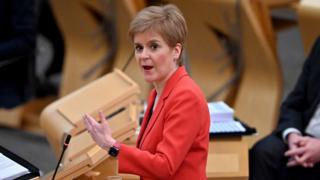 The first minister asked everyone to continue to do everything they can to keep themselves and their loved ones safe.

She said: "Be careful and cautious. Follow all the rules that are in place. And still try to limit your interactions with others as much as possible."

The first minister also gave an update on the Protect Scotland app, which will soon be available to everyone from age 11 upwards.

Until now under 16s hadn't been able to register for the contact tracing app, which helps to monitor and alert people if they have been in contact with someone who has tested positive for the virus.