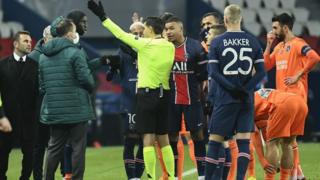 A Champions League football match between Paris St-Germain and Istanbul Basaksehir was abandoned on Tuesday night after a match official was accused of using a racist term towards a coach.

The Istanbul players say the fourth official Sebastian Coltescu, who stands at the side of the pitch next to the team benches, used racially offensive language towards their assistant coach Pierre Webo.

Former Cameroon footballer Webo was shown a red card after the argument and the Istanbul players walked off the pitch in protest, with the PSG players following.

The incident happened after 14 minutes into the Champions League Group H match, which was still goalless.

More on this topic:

Lukaku on why footballers need to take action against racism

The game will now restart at 5.55pm on Wednesday 9 December, kicking off from the 14th minute, and there will be a new set of refereeing officials.

Istanbul Basaksehir are already out of the Champions League but PSG have made it through to the knockout stages after Manchester United, who had been top of Group H, lost 3-2 to German club RB Leipzig.

A statement by Uefa (The Union of European Football Associations) said: "Uefa has - after discussion with both clubs - decided on an exceptional basis to have the remaining minutes of the match played with a new team of match officials.

"A thorough investigation on the incident that took place will be opened immediately." 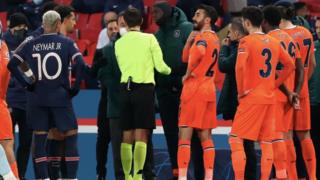 Istanbul and former Chelsea player Demba Ba, who was a substitute, could be seen on the touchline asking the official: "Why, when you mention a black guy, do you have to say 'this black guy'?"

While both teams remained inside, PSG players warmed up in the tunnel but the Istanbul Basaksehir side didn't leave their dressing room and after two hours it was announced that the game would not be finished on Tuesday.

PSG forward Kylian Mbappe later tweeted: "Say no to racism. Webo we are with you."