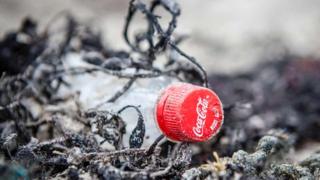 Coca-Cola, PepsiCo and Nestlé have been named the world's top plastic polluters for the third year in a row.

Coca-Cola was ranked the world's number one plastic polluter by the charity 'Break Free From Plastic' in its annual survey, after its drink bottles were the most commonly found item left on beaches, rivers, parks and other litter sites in 51 of the 55 countries that took part in the survey.

This is an increase from last year where Coca-Cola was the most frequently littered bottle in 37 out of 51 countries.

The charity has accused these companies of making "zero progress" in the fight against plastic pollution.

A spokesperson for The Coca-Cola Company told Newsround "we are making progress" in addressing this important issue and it is committed "to get every bottle back by 2030, so that none of it ends up as litter or in the oceans, and the plastic can be recycled into new bottles."

US to protect coral reefs in Caribbean and Pacific

What else did the survey show? 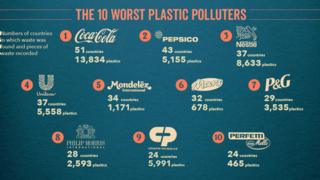 The annual inspection was carried out by 15,000 volunteers around the world - they identified the largest number of plastic products from global companies found in the highest number of countries.

What action is being done?

Emma Priestland, the global campaign coordinator for Break Free From Plastics, said these three huge companies "should be leading the way in finding real solutions."

"We need to stop plastic production, gradually stop single-use plastics and bring in strong reuse systems which will become standard practice," she added.

Abigail Aguilar from Greenpeace Southeast Asia, which is an independent environmental organisation, told Newsround these results "are not surprising."

To stop this mess and combat climate change, global companies like Coca-Cola, PepsiCo, and Nestlé must end their addiction to single-use plastic packaging and move away from fossil fuels." 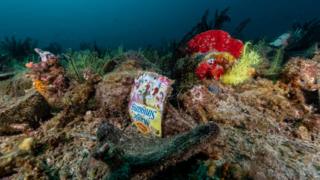 Coca-Cola said it is "making progress" to address this important issue.

"Bottles with 100% recycled plastic are now available in 18 markets around the world, and this is continually growing," a spokesperson told us.

The company added that it has reduced plastic use in its secondary packaging and explained that globally "more than 20% of our portfolio comes in refillable or fountain packaging."

It explained that fountain packaging in this case, is a plastic sachet in a cardboard box. 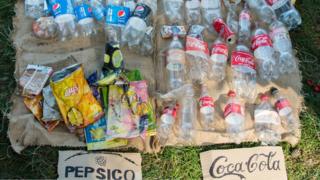 A spokesperson for PepsiCo told Newsround that protecting the environment is really important to them.

"We're continuing to work hard to reduce how much plastic we use and to include more recycled plastic in our packaging. It's great to see so many people get involved with projects we're supporting like the Great British Spring Clean, and our Crisp Packet Recycling Scheme, as we work together to change how we use and recycle plastic packaging."

Earlier this year, PepsiCo committed to putting all its ready-to-drink drinks in Great Britain into recycled plastic bottles from the end of 2022. 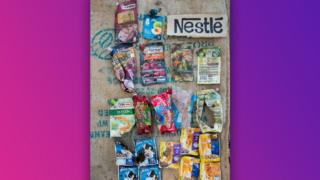 Nestlé, whose name you may have seen printed on cereal boxes and chocolate bars, said it "wants to be part of the solution" and it aims to make sure that 100% of its packaging will be recyclable or reusable by 2025.

"We have a huge amount of work to do but we can't do it alone. We want to continue to work with our peers to build new partnerships, drive new projects and to work with the government to create a level playing field," a spokesperson told Newsround.

It said progress has already been made. This year for example, the company launched the Smarties sharing block in recyclable paper packaging.

It has also started working with waste management business, Biffa, to try and create recycled plastic for its Buxton water bottles.

Coronavirus: Masks are important, but how can we stop them harming the environment?