Saber-toothed tiger skeleton up for auction 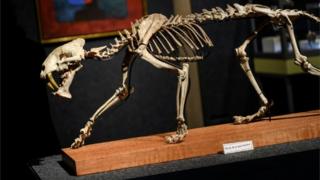 The bones of a 37-million-year-old Sabre-tooth tiger are going up for auction.

The Saber-tooth tiger, or the Smilodon, was a mammal known for its distinctive pair of long, razor sharp canine teeth.

It's one of the most iconic prehistoric animals, and existed during the last ice age - 12,000 years ago.

The remains of one of these tigers was found in South Dakota, in America, last year.

Now they're going up for auction, and because the fossils are such a rare find, they're expected to be sold for over £65,000!

Would dinosaurs still be here if an asteroid hadn't hit Earth?

Check out these roar-some special coins

What is a fossil?

Fossils are the remains or traces of plants and animals that lived long ago, and they give scientists clues about the past.

Most fossils are found in earth that was once underwater. They usually formed from the hard parts—such as shells or bones—of living things.

After a living thing died, it sank to the bottom of the sea. Then layers of earth and the remains of other living things built up on top of it. 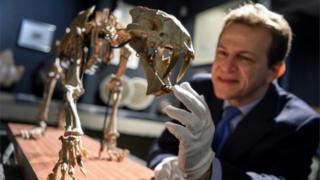 Fabrice Coffrini/AFP
It's one of the most iconic prehistoric animals, and existed during the last ice age - 12,000 years ago

The bones of this Sabre-tooth are from something called the Nimravidae family, a type of cat-like mammal.

They lived in North America, Europe, and Asia 42-20 million years ago. They lasted for about 22 million years.

Not ALL of the bones from this tiger were found, so auctioneer Bernard Piguet said the "missing bones were remade with a 3D printer". 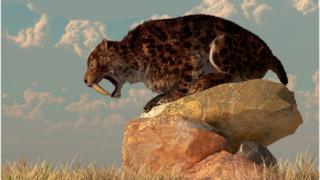 Facts about the Sabre-tooth tiger for you to bite into!

Shark vs. Pteranodon: Ancient fossil shows who would win in prehistoric fight