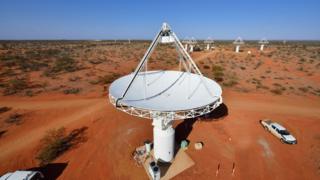 A million new galaxies have been pictured for the first time by a super-powerful telescope in Australia.

The Australian Square Kilometre Array Pathfinder radio telescope (ASKAP) is made up of 36 dish-shaped antennas in the outback of Western Australia which listen for radio waves from deep space and can see a region of the sky about 30 times larger than other telescopes.

In the record-breaking survey of the southern sky, the telescope mapped out a total of three million galaxies in just two weeks - around a million of which were undiscovered until now.

The fact that there are so many receivers means that scientists from CSIRO, Australia's national space agency, can monitor a much larger area of space and results are a lot quicker.

The results are considered to be a game changer for astronomers because previous surveys of galaxies have taken years to produce.

Scientists have put the findings into something called a Rapid ASKAP Continuum Survey which includes a "Google Map" of the universe from just 903 radio images.

The lead author of the study, David McConnell, said the findings were really significant for future astronomy.

Her said: "It means we can come back and do it again without a lot of effort, and gives astronomers the chance to look for things that have changed."

Scientists think the telescope will allow them to find tens of millions of new galaxies in future surveys.

The telescope is so powerful that it produced the raw data at a faster rate than Australia's entire internet traffic.

Hubble: 30 years since the telescope sent first image back to Earth!