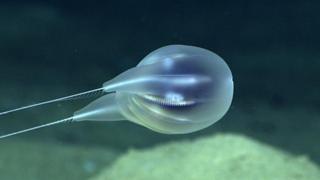 Scientists have just discovered a mysterious new species of 'sea blob' which lives deep in the ocean.

It was discovered by scientists with the National Oceanic and Atmospheric Administration (NOAA) during a deep sea dive off the coast of Puerto Rico in 2015.

"It was a beautiful and unique organism," says oceanographer Mike Ford: "It moved like a hot air balloon attached to the seafloor on two lines" 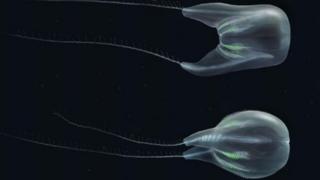 Nicholas Bezio
Here is an illustration of the new species.

Normally scientists are able to study potential new species up close over a period of time, but what's interesting about this discovery is that the comb jelly was identified based purely on a video that was taken of it during their dive.

NOAA marine biologist Allen Collins said: "We don't have the same microscopes as we would in a lab, but the video can give us enough information to understand"

The jellies live on a diet of tiny crustaceans (like crabs) and larvae.

In total, the scientists filmed the comb jellies at a depth of 3,900 metres below sea level.

This deep in the ocean there is virtually no light at all, which is why scientists call it the midnight zone.

As well as it being pitch black, the pressure levels at the bottom of the sea are really high - from all of the water weighing down - so scientists have to use specially adapted submarines to cope.

It is for this reason that scientists are not really able to collect animals that live that far down in the ocean and bring them to the surface to study, as their bodies wouldn't be able to cope with the change in environment.

The videos of the comb jellies are now part of the Smithsonian National Museum of Natural History and can be viewed by the public.

Ocean Exploration Trust's mission to explore bottom of our seas

Holocaust victims to be remembered with light