Every year tens of thousands of children cut off their hair and donate it to the Little Princess Trust, a charity who use donated hair to make wigs for children who have lost their hair following cancer treatment.

But when 10-year-old Carly from Norfolk asked to donate her hair to the charity, like her friends had done, she was surprised and disappointed to hear that they wouldn't be able to accept it.

The Little Princess Trust said for many years it had sought to find a wig manufacturer who can use afro hair in its wigs, but without success.

How to look after afro hair during lockdown

Why school can be tough for kids with afro hair

In an email to Anna, Carly's mum, the Little Princess Trust said: "Unfortunately, the techniques and instruments used mean that the hair is more prone to breaking due to the different structure of the hair.

"Despite going to great lengths to try and find a way of utilising hair of this type we have unfortunately found that this is not possible."

The charity said the decision as to whether or not any hair can be used is made by their wig manufacturers.

But it said, it was continuing to look for ways to accept donated afro hair in wigs and asked for any wig makers able to help, to come forward and work with them. 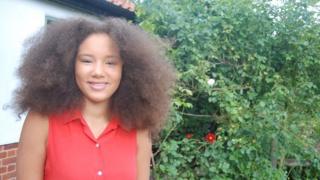 The charity has now said it will accept Carly's hair donation as "the charity continues to explore potential ways to use Afro hair in wigs".

The Little Princess Trust said that following the publicity generated by Carly's story, it's been contacted by several people who are interested in working together to search for a solution, and is extremely grateful to Carly.

She now plans to have her hair shaved off on 17 December and wants to raise as much money as she can for the Little Princess Trust through donations.

Carly said: "I am so happy and thank The Little Princess Trust. I hope in future, other children like me will be able to donate their hair to be used in wigs."

Carly's mum Anna said the experience had been an "eye opener" as she had not anticipated how complicated the process of making a wigs in general, let alone wigs from afro hair, was.

She said: "Carly is so over the moon with the outcome. We would like to thank wigmakers and the general public who came along to offer their support, but we would like to take this opportunity to work with The Little Princess Trust."

Phil Brace, Chief Executive of The Little Princess Trust, said that although the charity cannot be certain it will find a solution, "we feel any development is positive as it will improve the knowledge and understanding for us and, importantly, for wig manufacturers in this area".

He added: "Carly really has provoked great conversation and debate while creating more awareness on the specific challenges of using Afro hair in wigs."

Why do some children lose their hair?

Hair loss can come about as a result of: 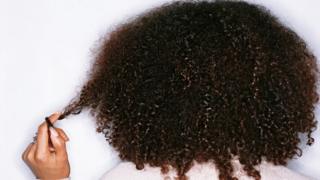 Getty Images
There are many different kinds of afro hair but they are often referred to as Type 4 hair because of its 'kinky' nature. Type 1 hair is the straightest.

Carly isn't the first child with afro hair who has experienced difficulties when it comes to donating her hair.

Earlier this year mum Cynthia Stroud set up a charity called Curly Wigs for Kids, after she tried to donate her son's afro hair to be turned into a wig but found no charities that would accept it.

She used her sewing machine to turn her son's hair into hair wefts and sent them to a wig maker who managed to turn the hair into a wig.

As the charity was only started very recently only one wig has so far been made and donated to a child suffering from hair loss, but Cynthia is hoping to be able to make more in the future.

Cynthia says it is the first charity in the UK to make and provide free human hair wigs to children using curly or afro hair, and would like to work with the Little Princess Trust to find a way for more wigs to be made using afro hair.

'Why I'm glad that I have alopecia'