US election: Trump says he will leave White House if Biden win is confirmed 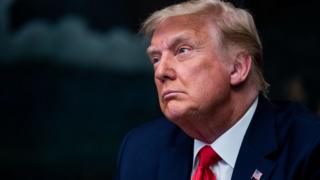 Donald Trump has said he will leave the White House if Joe Biden is formally confirmed as the next US president by the electoral college.

The electoral college is the body that formally elects the President, acting on the votes of each state's citizens.

The president has still refused to accept defeat in the 3 November vote.

But speaking to reporters on Thursday he would not say if he would attend Mr Biden's inauguration on 20 January. This is the ceremony that marks the start of the next president's time as leader.

Mr Trump also once again repeated voting wasn't done properly or fairly but his team haven't produced any evidence that this is true.

More on the US election result

US Election: Joe Biden promises to be a president for all Americans

The White House will have some new fluffy residents...

After waiting several days for the result, Mr Biden had won enough states to receive 306 electoral college votes and Mr Trump had 232.

It took Mr Biden beyond the total of 270 electoral college votes needed to become President.

The way the US Presidential election works means Americans vote for people called 'electors' in their state. There are 538 electors in total and they will meet in December 2020 to make the result official.

Mr Biden also leads the popular vote by more than six million - this means the total number of people who voted.

The president mounted a number of legal challenges over the election, because he thinks some of the votes should not be counted, or were wrongly cast. Most of these legal challenges have been dismissed.

What else has Donald Trump said? 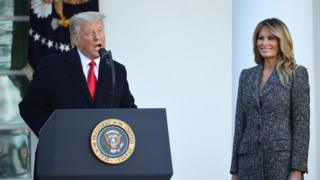 Asked on Thursday whether he would agree to leave the White House if he lost the electoral college vote, he said: "Certainly I will, certainly I will and you know that."

However, he went on to say that "if they do [elect Joe Biden], they made a mistake", and suggested he may never accept defeat.

He also added that "it's going to be a very hard thing" to hand over the role.

What about Joe Biden?

President-elect Joe Biden has already announced who will be joining his top team when he takes over from Donald Trump in January.

Earlier this week he urged Americans to hold smaller Thanksgiving celebrations, as coronavirus cases in the country continue to rise.

US Election: Joe Biden promises to be a president for all Americans

Where is Donald Trump and what is he doing?