Plastic pollution: Why campaigners want a ban on plastic sachets 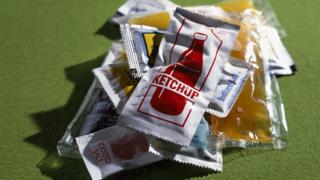 Campaigners are asking governments to ban single-use plastic sachets, saying they are really bad for the environment.

The sachets - plastic packets that contain things like ketchup for fast food, samples of shampoo from magazines, or face wipes - are used globally 855 billion times per year, according to campaign group A Plastic Planet.

They say if you lined them up, end-to-end, they would reach the Moon 189 times!

The use of plastic sachets is expected to reach one trillion by 2030, but most can't be recycled meaning they end up in landfill where it can take up to 1,000 years for plastic to decompose and degrade. 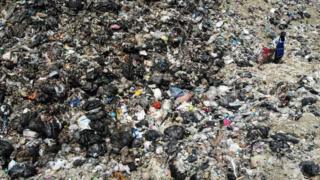 The UK's single-use plastic ban, introduced on 1 October, made it illegal for businesses to sell things like plastic straws and cotton buds.

The European Union has a similar ban on throwaway items, which comes into force next year.

However, plastic sachets are not included.

This week's news about the environment

Now 40 experts including politicians such as John Randall, a former environment adviser to Theresa May when she was prime minister and business owners, like Iceland supermarket's managing director Richard Walker, have written a letter online calling for plastic sachets to be included in the bans too.

Sian Sutherland, founder of A Plastic Planet, which started the campaign, said: "The sample sachet is a huge piece of the pollution puzzle which every [government] is missing."

"The plastic sachet, the ultimate symbol of our grab and go, convenience-addicted lifestyle, has been virtually invisible to all," she added.

"The result? Our earth is saturated with these uncollectable, unrecyclable, contaminated, valueless little packets.