Gaming is a popular hobby enjoyed for lots of children all over the world. It's a way for people to get creative, have fun with friends and explore amazing imaginary worlds.

Eight-year-old Alyssa is a big fan of dress-up games and loves to play them in her spare time.

However, Alyssa and her mum Yvonne decided to create their very own after struggling to find any characters in her favourite games with afro hair. 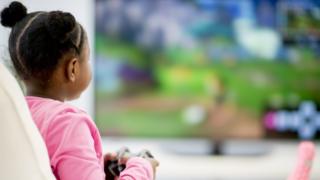 According to the most recent report from the Association for UK Interactive Entertainment (UKie) - the organisation that oversees the video game industry in the UK - around 10% of people working in gaming are from Black, Asian or minority ethnic (BAME) backgrounds, and black people make up just 2% of this figure.

The lack of diversity behind the scenes can have a big impact on the range of characters seen on-screen.

93% of children in the UK regularly play online games, according to the 2019 Parent Zone report

"Games are a brilliant way to tell stories and are a way to put yourself in someone else's shoes. That's why it's really important that games feature lots of different kinds of characters from all kinds of backgrounds," said Dr Jo Twist who is UKie's CEO.

"The games industry is working hard to make sure they hire people from different backgrounds so they can design characters and games that can be enjoyed by everyone."

Alyssa and her mum recognised the need for more representation when it came to afro hair in the world of gaming. For the last two years, the pair have worked on their very own mobile app game called Frobelles, which features three black sisters, all with afro textured hair.

"Frobelles is definitely a step in the right direction," said Annabel Ashalley-Anthony, founder of the gaming community Melanin Gamers. It aims to showcase people of colour in the industry and to show young people the diversity of roles in gaming where they can play an active part in shaping the gaming content of the future.

"Seeing a game that showcases numerous black women with afro hair is a phenomenal thing to see. As a child I would have loved a game like this - I still love a game like this right now as an adult! It's so important just seeing yourself and seeing someone that looks like you in a positive light."

Alyssa played a big part in the process, voicing the trio and also choosing the wide range of hairstyles and clothes players can pick from.

She hopes the game will enable those will hair like hers to feel represented in the gaming world.

The girls building robots in their garage