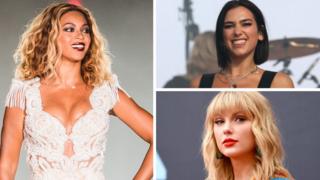 Nominations for the 2021 Grammy Awards have been revealed.

The Grammy Awards is one of the biggest award ceremonies in the music industry, and singers from all over the world are nominated.

The ceremony announcing the winners will take place on 31 January, 2021.

Most unique outfits from the Grammy awards

Who else has been nominated? 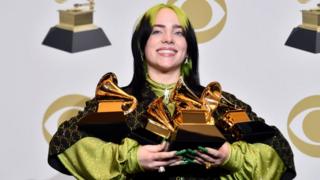 Getty Images
Billie Eilish won five awards at her first ever Grammys - not a bad start!

Billie Eilish has been nominated for three awards, including one for the song she recorded for the new James Bond film, which is yet to release because of coronavirus.

Billie made history earlier this year when she became the first female artist to win all four of the Grammy's main categories - best new artist, song of the year, record of the year and best album.

BTS also made history, by becoming the first K-pop act to receive a Grammy nomination for their song Dynamite, after they were invited to perform last year.

Singer Harry Styles also picked up his first ever Grammy nomination in the pop category, after his former band One Direction never received a nomination, despite their international success.

Beyoncé is the Grammys' most-nominated female artist ever, with 79 nominations. She's also one nomination away from equalling the record for the most nominations ever, which is currently held by her husband Jay-Z, and producer Quincy Jones.

However, it was sad news for The Weeknd (AKA Abel Tesfaye) who didn't receive any nominations, despite his song "Blinding Lights" having massive success on TikTok, having the biggest-selling album of 2020 in the US, and being chosen to headline the half-time show at the Super Bowl next year.

"The Grammys remain corrupt," he wrote on his social media account. "You owe me, my fans and the industry transparency." 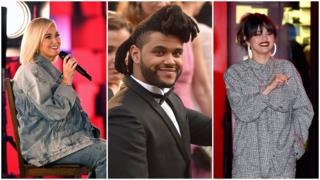 Getty Images
Katie Perry, the Weeknd and Selena Gomez didn't get the nominations they hoped for

The Grammys said they "empathised" with his disappointment but that some "deserving" acts miss out every year.

Nicky Minaj said on social media: "Never forget the Grammys didn't give me my best new artist award when I had 7 songs simultaneously charting on billboard. She added, 'They gave it to the white man Bon Iver."

Other big names that missed out on expected nominations were Katie Perry, Lady Gaga and Selena Gomez.

Many experts say one of the big problems with the Grammys is the categories they choose and which category artists are competing in.

For instance Justin Bieber complained that his album Changes was in the pop category, while he considered it R&B.

"It's a historic year as 10 black women are nominated in the top four categories and more than 20 black nominees are represented in the general fields," they said in a statement.

"Also, for the first time, all six nominees for Best Rap Album are black independent artists. This is progress."

The collective acknowledged there had been "some disappointments" in the nominations, but added: "We're listening. Our work is not done, and it will take some time, but the mission to be more inclusive continues."

How will the ceremony go ahead? 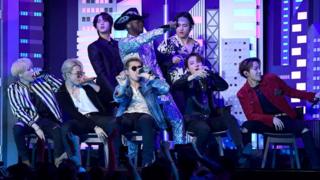 Getty Images
Lil Nas X was joined by BTS during a performance of his hit, Old Town Road

"We are simultaneously developing three plans for what the show would look like: One is the traditional show with the full crowd, two is a limited crowd, and three is no crowd, and there's creative around all three of those ideas: how and where we would film it. But none of them involve changing or postponing the date," said Harvey.

He said they've also been speaking to artists and their managers to make sure they feel comfortable, whilst trying to figure out how they can give live performances.

"But I also think it's important and helpful to have shows like this, when there's been so much uncertainty and unrest—to have something you know is coming around every year and to know there's a time when we all sit down together and watch great entertainment and art" and he said it will be a "spectacular show".

BTS, Taylor Swift and other winners at the American Music Awards 2020

Black Is King: Beyonce and Disney team up to release new film