A coronavirus vaccine, developed by the University of Oxford in the UK, stops 70% of people developing symptoms of the disease.

It follows the news that other vaccines developed by companies such as Pfizer and Moderna showed 95% protection.

Although 70% might seem low in comparison, the new Oxford jab, developed with company AstraZeneca, is cheaper, plus it's easier to store and transport.

So far, the other coronavirus vaccines have had to be stored in really cold temperatures, but this new medicine can be kept at fridge temperature meaning it can be transported all over the world.

Researchers have also found that changing the dosage could make this vaccine 90% effective.

Everything you need to know about coronavirus

What is being done to tackle the virus?

To test the jab, Oxford researchers performed a large scale trial, where more than 20,000 volunteers, half in the UK, the rest in Brazil have taken the medicine to test how safe and effective it is.

As part of the tests the researchers found that protection against the virus could reach up to 90% when people were given a low dose followed by a high one. But it's not clear why there is a difference at this stage.

"Incredibly exciting news the Oxford vaccine has proved so effective in trials. There are still further safety checks ahead, but these are fantastic results."

The process of developing a vaccine normally takes ten years, but this vaccine has been made in around 10 months.

The UK government has pre-ordered 100 million doses of the jab, which is enough for 50 million people. 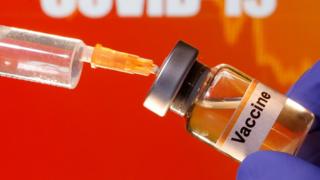 Reuters
When will people start getting the vaccine?

In the UK there are four million doses ready to go, with another 96 million to be delivered.

But nothing can happen until the vaccine has been approved by regulators who will assess the vaccine's safety, effectiveness, and that it is manufactured to high standard. This will happen in the coming weeks.

However, the UK has begun planning for a large operation of vaccinations against coronavirus, much bigger than the winter flu jab given to older people, or the injections you get while at school.

Care home residents and staff will be first, followed by healthcare workers and the over 85s. The plan is to then work down the age groups.