Microplastics found in snow close to summit of Mount Everest Microplastics have been discovered in snow and water close to the summit of the tallest mountain in the world, Mount Everest.

It's the highest point on earth that plastics have ever been found.

Scientists made the discovery of polyester, acrylic and nylon fibres at the Balcony of Mount Everest which is 8,440 metres above sea level.

They said the materials found are most likely fragments from tents, climbing ropes and the high performance outdoor clothing commonly used by climbers.

Why is plastic pollution a problem?

It's also been suggested that the plastics could have been transported by extreme winds that regularly impact the mountain's higher slopes.

Microplastics are small pieces of plastic that are less than 5mm in length.

Microplastics happen when bigger bits of plastic - such as bottles, bags and containers break down in soil or in the sea and pollute the environment.

Glitter is also a microplastic.

Some plastics are so tiny they can't even be seen with the naked eye. They are called nanoplastics.

Dr Imogen Napper, who led the study for the University of Plymouth said: "Over the past few years, we've found microplastics in samples collected all over the planet - from the Arctic to our rivers and the deep sea."

"Finding microplastics near the summit of Mount Everest is a timely reminder that we need to do more to protect our environment," she added. 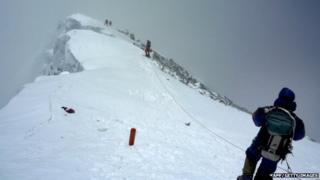 Since the first confirmed summiting of Mount Everest in 1953, the use of plastic has increased from five million tonnes globally to more than 330 million tonnes in 2020.

Professor Richard Thompson, who is head of the International Marine Litter Research unit, said: "The study emphasises the importance of designing materials that have the benefit of plastics without the lasting and harmful legacy."