Christmas: How could it be different this year?

There's been a lot of talk about how Christmas might be different this year because of coronavirus.

All four UK nations - England, Scotland, Wales and Northern Ireland - are trying to work out a "common approach" so that families spread across the UK can still meet up and spend time together.

No final decisions are likely to be made until mid-December though.

There have also been lots of reports saying there could be special rules in place over Christmas, with some restrictions relaxed.

So, what does it all mean? And what do we actually know at the moment about what might happen at Christmas?

Here's what we know so far 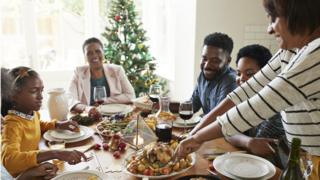 The Scottish, Welsh and Northern Irish first ministers (Nicola Sturgeon, Mark Drakeford and Arlene Foster) have all held a virtual meeting together with UK government minister Michael Gove and other senior UK officials.

Scotland's First Minister Nicola Sturgeon said the meeting had "discussed the Christmas period and how we could come to a sensible... and safe plan that would allow people, not 100% normality, but a greater degree of normality - in particular the ability to spend some time with loved ones".

Mr Gove said they all recognised families across the UK "want to be able to see their loved ones this Christmas".

It is understood the governments across the UK will now attempt to put a "joint approach to Christmas" into action, for example around issues such as travel and testing.

Environment Secretary George Eustice said recently that people may not be able to gather like normal in large groups, while Ms Sturgeon's most senior public health adviser in Scotland, Jason Leitch, said in October that families who live apart should prepare themselves for a "digital Christmas".

Welsh ministers have said it could be weeks before an announcement is made, and warned this year's festive period would "not be like normal".

Ministers in Northern Ireland said they would do all they could to "protect" as much of Christmas as possible.

All four nations have come up with plans though allowing university students to return home to their families for Christmas. They include specific days for travel and coronavirus testing before leaving for home.

What do you want to know about Christmas this year and how it might be different? Let us know in the comments below.

With five weeks to go until Christmas, it's still hard to predict what will happen at the moment.

A final decision is unlikely to be made until mid-December, when health chiefs learn whether coronavirus cases have fallen during the latest restrictions across the UK, including the national lockdown in England which runs until 2 December.

Downing Street has said plans for what will follow England's lockdown and proposals to ease restrictions over Christmas will be set out next week.

How religious celebrations could be different

At the moment, it is not known what will happen about traditional Christmas religious services like midnight Mass.

There have been some reports that families may be allowed to mix indoors for five days from Christmas Eve.

The government's medical adviser on Covid-19, Dr Susan Hopkins, said she hoped the government will "allow some mixing" of households and that she hoped Christmas could be "as close to normal as possible".

But she did also add that tough restrictions might be needed before and after the holiday, to allow mixing to take place.

The BBC's health correspondent Nick Triggle said any changes would be for a limited time and it's likely advice will urge families not to hold big gatherings, and to travel by car rather than use public transport.

Sage, the group of scientists which advises the government about the pandemic, has said that for every day of relaxed rules, an extra five days of tighter restrictions would potentially be needed. Suggesting that a further month of lockdown may be put in place after Christmas.

What are the challenges?

Christmas is a time for big get-togethers and it usually involves people travelling to see family and friends too. It is this increase in people mixing and moving around which is a concern.

The more people someone comes into contact with, the higher the risk of being infected and passing the virus on to others. This is why social distancing rules are currently in place across the UK.

There are other challenges too, for example different rules and restrictions in different parts of the UK.

Some areas also have more cases of coronavirus than others. And there is still over a month until Christmas, so a lot can change in that time.

Why are there different rules around the UK?

What does devolution mean? 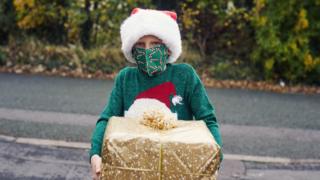 Defence Secretary Ben Wallace said he did not want to be "the Grinch that stole Christmas" but that the government wants to prevent overcrowding in hospitals, protecting the NHS to save lives.

He told ITV's Good Morning Britain: "I would love all of us to be able to have a Christmas, but more than anything I want us to get through this Covid and try and get this country back to normal and I want to protect lives."

Professor Andrew Hayward, a member of the Sage group, said mixing at Christmas does pose "substantial risks". He explained that coronavirus can cause problems for older people especially during winter months.

"My personal view is we're putting far too much emphasis on having a near-normal Christmas," he said.

Prof Hayward added: "We're on the cusp of being able to protect those elderly people, who we love, through vaccination and it would be tragic to throw that opportunity away and waste the gains we've made during lockdown by trying to return to normality over the holidays."

His comments follow the news that there has been progress in developing a vaccine to protect people from the virus.

How are you feeling about Christmas and what do you want to know about how it might be different this year? Let us know in the comments.

Coronavirus: What are the rules where you live?

127 comments
Back to top
unknown