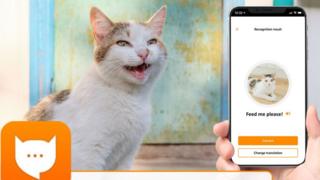 Ever wanted to know what your feline friend was trying to tell you? Well, now your dreams might be about to come true!

A former Amazon Alexa engineer has developed an app, called MeowTalk, that aims to translate your cat's miaow by recording the sound and then attempting to identify the meaning.

The cat's owner also helps to label the translation, creating a database for the AI software to learn from.

It's still in its early stages of development and currently there are only 13 phrases in the app's vocabulary including: "Feed me!", "I'm angry!" and "Leave me alone!"

What do you think of the idea? Would you try it out with your cat? Vote below and let us know in the comments.

World's fattest parrot is New Zealand's bird of the year

The UK’s biggest bird could be making a comeback

Research suggests that unlike humans, cats do not share a language. Instead, the sounds cats make is unique and tailored to its owner, with some kitties being more vocal than others.

By recording and labelling sounds, the artificial intelligence and machine-learning software can better understand each individual cat's voice - the more it's used, the more accurate it can become.

But the idea doesn't stop there...

The eventual aim is to develop a smart-collar which would translate your furry companion's miaow instantly, and a human voice would speak through the collar. Does it get more sci-fi than this?!

Javier Sanchez, group technical program manager at app developer Akvelon said: "I think this is especially important now because, with all the social distancing that's happening, you have people that are confined at home with ... a significant other - this feline."

He added that the app will let owners "communicate with their cat, or at least understand their cat's intent, and build a very important connection."

How accurate is it?

Juliette Jones, cat behaviour specialist at Wood Green, The Animals Charity, said: "Most cat vocalisations are actually to communicate with humans, as most owners will respond to them."

As the app relies on the owner labelling translations, there is room for miscommunication, she added.

"There may be some inaccuracies which could give owners the wrong impression about what their cats are feeling."

She went on to say that this could negatively affect "the cat, the owner and their relationship - for instance, if a cat is purring it doesn't necessarily mean they are happy and restful. A purr can also be seeking affection or indicating discomfort. In its current form, the app should only be used for entertainment." 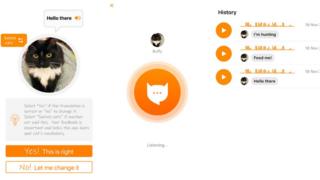 Anita Kelsey, cat behaviourist and author of 'Let's Talk About Cats' said: "We will probably never be able to convert a cat's miaow into human words.

"All we can do is have fun thinking about what they might be saying from our own human perspective.

"The app seems like fun and there's no harm in having fun with your cat."

Cats can recognise their names when called

Dalmatian pelicans: The UK’s biggest bird could be making a comeback