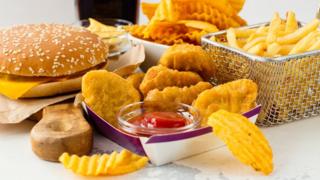 The UK government has revealed a plan to ban all junk food adverts online.

The ban would affect food products that are high in fat, salt and sugar in an attempt to solve health problems caused by people being overweight.

Research has shown that one in three children leaving primary school are overweight, or obese.

The word obesity means being so overweight that it's bad for your health.

Unhealthy food deals will be banned in England

The government's health secretary, Matt Hancock said he wants children and families to make "healthier choices" when it comes to food.

"I am determined to help parents, children and families in the UK make healthier choices about what they eat," Mr Hancock said.

"We know children spend more time online. Parents want to be reassured they are not being exposed to adverts promoting unhealthy foods, which can affect habits for life."

The government has estimated that children aged under 16 were exposed to 15 billion junk food adverts online last year, compared with an estimated 700 million two years earlier.

The plans will now be discussed by representatives from the food industry, members of the public and the government for six weeks, before a decision is made over whether the advert ban will happen or not.

If it's given the go ahead, the restrictions will affect posted ads for certain foods on Instagram and Twitter, along with adverts on Facebook and also sponsored search results on Google.

Companies advertising healthier foods have nothing to fear.

However, some of the companies that will be affected by the advertising ban think it's too strict and goes too far.

Stephen Woodford, chief executive of the Advertising Association, said: "If this policy of an outright ban goes ahead, it will deal a huge blow to UK advertising at a time where it is reeling from the impact of Covid-19.

"To borrow the prime minister's language, this is not an 'oven ready' policy, it is not even half-baked. But it does have all the ingredients of a kick in the teeth for our industry."

But Fran Bernhardt, coordinator of the Children's Food Campaign said: "Companies advertising healthier foods have nothing to fear."

"Online adverts have cast unhealthy food in the starring role for far too long. The current regulations are inadequate to protect children," she said.

What do you think of the government's plans? Let us know in the comments.

As part of the government's strategy to help people live healthier lifestyles, it also announced in July that junk food adverts won't be shown until after 9pm on TV.

Meanwhile Google announced a ban on junk food adverts from being shown to children on its platforms, including YouTube, earlier this year.

Obesity: Unhealthy food deals will be banned in England