Vote: Would you give a vegan burger a go? 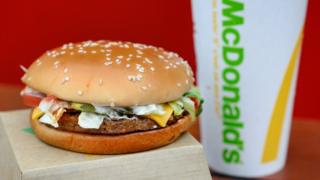 Vegan food has increased in popularity over the last few years, with more people choosing to opt for plant-based based options over meat products.

Many have switched to meat-free substitutes for reasons relating to issues including health, the environment and animal welfare.

Vegan diets can often include lots of fruit and vegetables, but fast-food restaurants are also getting in on the action.

Kentucky Fried Chicken introduced its first ever vegan burger in the UK back in 2019 and Greggs' plant-based sausage roll has gained lots of loyal fans since it first came onto the scene the same year.

Lots of other food outlets including Pizza Hut and Subway have also started offering more vegan options on their menus.

Want to know more about veganism?

Fast-food chain McDonalds has now announced it'll be adding a brand new burger to its menu very soon. The McPlant, which is a burger containing a plant-based patty, was trialled in select restaurants in Canada last year using burgers from the company Beyond Meat.

"We are excited about the opportunity because we believe we have a proven, delicious-tasting product," said Ian Borden, who heads McDonald's international operations.

It could be made widely available to customers from as early as 2021, although it's not yet known who will supply the patties for the burgers.

So the big question is: Would you be up for trying the a vegan burger? Have your say in the vote below, or let us know in the comments!

100 comments
Back to top
unknown