The White House will have some new residents... meet Champ and Major 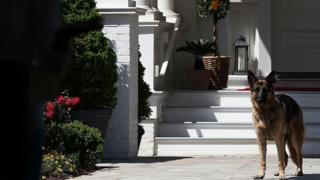 Getty Images
Joe Biden's dog, Champ, at the Vice President's residence at the Naval Observatory in 2012

Joe Biden has been elected as the new President of the United States.

The BBC projects that Mr Biden has won the key state of Pennsylvania - that means the BBC expects he is very likely to win once all the votes are counted.

It takes him beyond the total of 270 electoral college votes needed to become President.

This means a lot of things will be changing in the White House when he officially becomes President in January.

For dog fans everywhere, there's some exciting news... Biden's two dogs Champ and Major are expected to move in with him!

Joe Biden and his wife, Jill, have had Champ since 2008 when he was a puppy, and he lived with them at the vice presidential residence (on the grounds of the White House) when Biden was Vice President during Barack Obama's Presidency.

But Major will experience it for the first time when Biden becomes president. 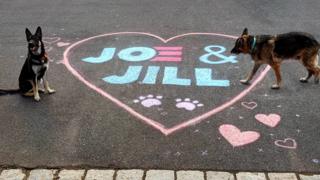 The Bidens adopted Major in 2018, making him the first rescue dog to move into 1600 Pennsylvania Avenue.

Both Champ and Major are German shepherds. 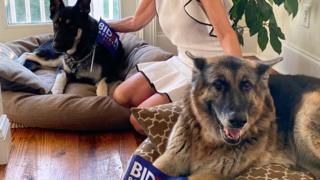 @DrBiden
Major and Champ with their Biden for President flags

Joe Biden posted "Let's put dogs back in the White House" a few times on his social media accounts in the run-up to the election, with videos of dogs from all around the USA donning "Dogs for Biden" bandanas. 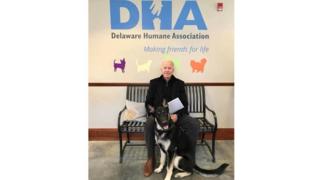 @JoeBiden
Major looks like one very good boy.
Have other pets lived at the White House before?

30 of the 44 presidents of the United States have had had at least one dog during their presidency. The first was George Washington when he moved there in 1790.

The last president to have a dog in the White House was Barack Obama, who had two dogs. 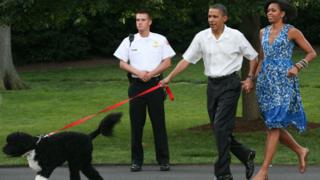 In 2008, in his first victory speech, Barack Obama promised his children they could get a puppy when they moved into the White House, which they did - the new First Dog was named Bo. 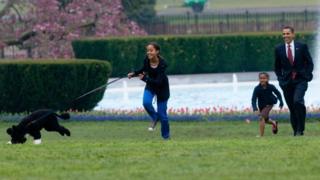 Getty Images
Sasha and Malia Obama in 2009 with their Dad and new puppy, Bo

In 2012, after pressure from his daughters who wanted a second dog, Barack Obama said Bo, was "probably enough." 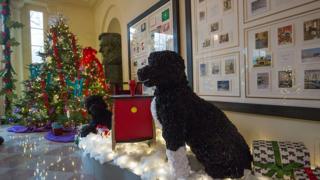 The new Vice President-elect Kamala Harris doesn't have any pets, but she is a dog fan.

On National Pet Day in 2019, she tweeted photos of four dogs in her Senate Office, saying "Dogs are always welcome in my Senate office - here are a few paw-licy advisors who regularly stop by." 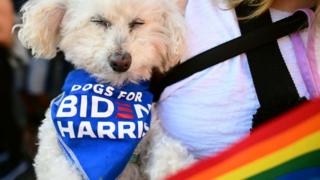 Getty Images
Kevin the dog celebrating Joe Biden's win - with a nap, because why not? - in California

Pets quiz: How much do you know about your favourite household animals ?

Love Your Pet Day: What's your favourite thing about yours?