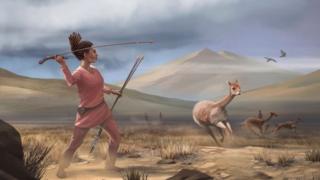 There has long been a view that in ancient times men were the hunters - out getting the meat - while the women were gatherers - foraging for fruit, vegetables and wild plants.

But now archaeologists are having to rethink. It's after the remains of a teenage girl, who lived around 9,000 years ago, was discovered at a burial site in Peru alongside "a well-stocked, big-game hunting toolkit".

Researchers say the finding challenges the view that prehistoric hunting was exclusively the role of men.

Ancient warrior was a 13-year-old girl

The tools include those that could be used to hunt a large animal; a knife and flakes of rock for removing internal organs, and tools for scraping and tanning hides.

The sex of the human remains was confirmed by a protein analysis of the dental remnants, while bone examination suggests she may have been between aged 17 to 19 at the time of her death. 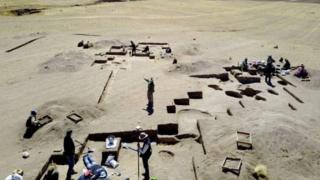 The bones were found in 2018 during archaeological excavations at a site called Wilamaya Patjxa in Peru.

Researchers said that after the "surprising discovery", they looked at archaeological records of other burial sites throughout North and South America and found evidence of 27 other sites where people were buried with big-game hunting tools.

Have you ever wondered how scientists are able to work out how old something is?

Based on their findings, the team thinks that between 30% and 50% of big-game hunters who lived more than 10,000 years ago in the Americas could have been women.

How significant is the discovery?

Randy Haas, an assistant professor of anthropology at the University of California, Davis, US, and the lead author on the study, said that the traditional view that men were the hunters might have led people to believe that inequalities between men and women that we see today, is somehow 'natural'.

He said: "Among historic and contemporary hunter-gatherers, it is almost always the case that males are the hunters and females are the gatherers."

Randall Haas/University of California, Davis.
These are some of the tools recovered from the burial pit floor, including projectile points

He added: "It took a strong case to help us recognise that the archaeological pattern indicated actual female hunting behaviour."

But Professor Haas said that it's now clear that the work was divided, perhaps making men and women more equal in this era than in more modern times.

Ancient warrior was a 13-year-old girl