The US Senate has confirmed Justice Amy Coney Barrett to the Supreme Court a week before the US presidential election.

Her appointment is being described as a victory for Donald Trump, his election rival Joe Biden has called the move 'rushed' and 'unprecedented'.

Even before the result of the election, Biden and his Democratic Party are worried that Justice Barrett's appointment will mean it's more likely the Supreme Court will favour Donald Trump's Republican Party when it comes to making important decisions.

So why does it matter so much?

One of the key things about getting a seat on the Supreme Court is that it is a job for life. Where as presidents can serve a maximum of 8 years (two four-year terms) Supreme Court justices remain until they choose to retire or they die, so appointing a justice is a big deal for any President.

More on the US election: 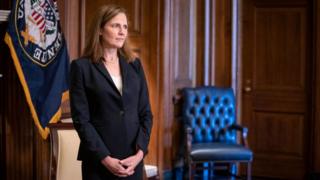 Getty Images
Justice Amy Coney Barrett has been confirmed to the Supreme Court
So what does the US Supreme Court do?

The US Supreme Court is the highest court in America and it makes the final decision on important laws and sometimes controversial issues that affect millions of Americans.

In doing so justices at the Supreme Court make sure rules set out in the US Constitution are followed.

A constitution is a written set of rules for a country - the United Kingdom doesn't have a written one, but many countries do.

The first rules in the US Constitution were decided in 1787.

What kind of decisions does the Supreme Court make and how does it make them?

In recent years, the court has approved same-sex marriages across all 50 states, decided President Trump did have the power to impose a travel ban stopping people entering the United States from certain countries and delayed an environmental plan by President Obama to cut carbon emissions in the country.

The decisions are generally made by 9 judges, known as justices, who are picked by the serving US president and have the job for life.Decisions have to be approved by a five or more justices for the court to pass a ruling. 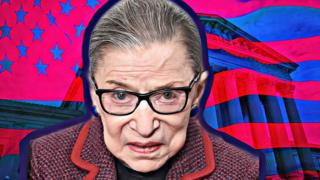 Getty Images / BBC
Justice, Ruth Bader Ginsburg died earlier this year so a new judge had to be picked to replace her

Earlier this year, justice Ruth Bader Ginsburg died at the age of 87.

It meant that a new justice had to be picked to take her place.

Ginsburg was a voice for liberal issues and often sided with the Democratic Party at a time when the Supreme Court had more Republican-leaning justices.

Supreme Court justices often, but not always, agree with the political party and the presidents that have selected them.

President Trump said: "This is a momentous day for America, for the United States constitution and for the fair and impartial rule of law."

He added: "She is one of our nation's most brilliant legal scholars and she will make an outstanding justice on the highest court in our land."

Amy Coney Barrett is known for having conservative views, and is expected to agree with Donald Trump and the Republican Party on issues such as gun laws, health care and immigration.

However, at a speech at the White House Justice Barrett said: "A judge declares independence not only from the Congress and the president, but also from the private beliefs that might otherwise move her."

Why is the timing controversial? 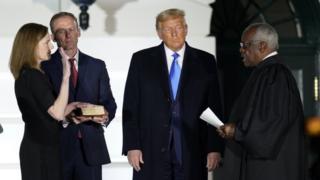 Appointing Supreme Court justices this close to an election is a controversial issue, with opinion divided about whether new judges should be chosen before or after the result.

Democratic vice-presidential candidate Kamala Harris said Justice Barrett's confirmation was "a disgrace, not only because of what she will do when she gets on the bench, but because of the entire process".

Democrats argued for weeks that it should be up to the winner of the presidential election to pick the nominee for the Supreme Court vacancy.

"We've made an important contribution to the future of this country," said Republican Senate Majority Leader Mitch McConnell on Sunday.

"A lot of what we've done over the last four years will be undone sooner or later by the national election. They won't be able to do much about this for a long time to come." 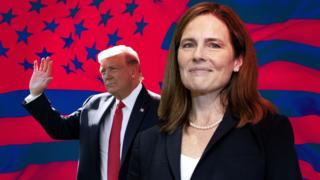 Four years ago, Republican senators refused a nominee selected by President Obama for the Supreme Court, on the basis that with eight months to go, it was too close to the 2016 US presidential election.

Now with just days to go, even if Donald Trump loses the 2020 election, Amy Coney Barett's position on the Supreme Court could mean his, and his parties, views are still represented in one of the most important institutions in America for a very long time.