Do vampire bats 'socially distance' when they are sick? 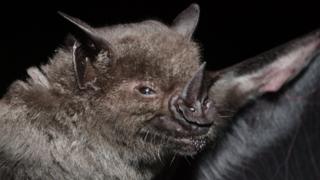 Gabriel Mendes
'Don't feel like hanging out?' Vampire bat in the wild

Scientists at Ohio State University tracked a group of wild bats living inside a hollow tree by fitting them with tiny backpack computers, all to find out how they interacted socially with each other.

Researchers gave 16 of the wild bats a safe injection that made their immune systems react as if they were sick, to see if their behaviour would change.

Thankfully the bats never actually felt poorly, their immune systems were just 'tricked' into fighting off the injection. After 48 hours the effects wore off and the bats were back being to being social again.

They discovered the 'sick' bats didn't seem to want to join in with social grooming, they also moved around much less and acted sleepier than the others.

Because the 'sick' bats were less likely to hang around with healthy-feeling bats, they would be less likely to spread a real virus in the wild. Researcher Simon Ripperger calls this 'passive social distancing' and thinks it might be more widespread in the animal kingdom than we know.

This passive social distancing is just like when we feel poorly and want to stay in bed rather than being around other people. It is a useful behaviour for humans as well, because it means we are less likely to spread an illness.