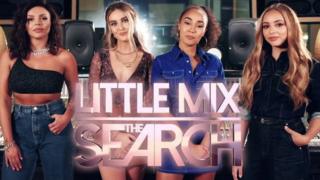 Little Mix are now one step closer to finding the band who will support them on their Confetti tour next year.

On Saturday night the six groups, chosen by Jesy, Leigh-Anne, Jade and Perrie, went head to head in a 'Battle of the Bands' to try and keep their place in the competition.

But it meant that one group had to leave the competition this week. 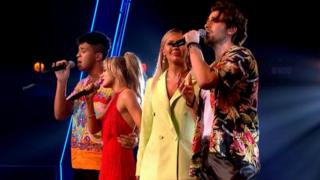 Jasper Blue made up of Rosie Mac, Melina Halpin, Liam McHugh and Jordan Smithy sang Shout Out To My Ex
Who is out?

Jasper Blue became the first group to leave the competition after failing to persuade the Little Mix band members to let them continue in the competition.

The band performed well in their sing-off against girl dance group Melladaze, but Perrie was in tears as she told the band she would be saving Melladaze.

Rosie from Jasper Blue said that their time on the show was 'incredible', telling presenter Chris Ramsay it had been "the best experience ever". 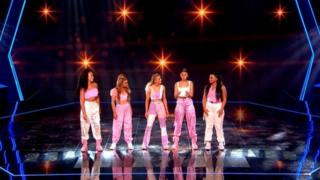 Aislí, Ellie, Lauren, Liv, and Megan make up Melladaze who were put together at the Girl Dance group auditions

The live shows had been due to begin last week but were delayed the episode after some of the crew members tested positive for coronavirus.

Jade was also self isolating at home this week and so was forced to carry out her role as a mentor via video link, which meant she also missed out on joining her bandmates as they performed their new single Sweet Melody.

Little Mix: The Search - Who are you most looking forward to performing live?