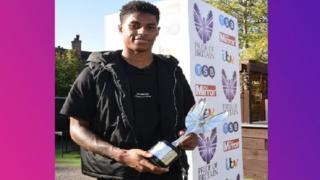 Marcus Rashford said people who are helping to feed children this half-term "are the real pride of Britain".

The footballer won the Pride of Britain award this weekend, based on his high profile campaign to help families who are struggling.

The England international has turned his social media feeds into a network of restaurants, cafes and communities where parents can go to find businesses that will help feed children during the October school holidays.

Rashford said: "I am extremely humbled but I'd like to think that I am receiving this award on behalf of all of the incredible people who have selflessly stepped up to support their communities during this pandemic.

The awards honour British people who have acted bravely or extraordinarily in challenging situations. 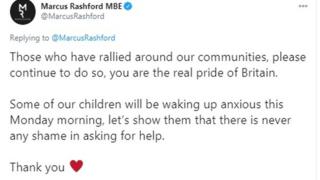 MPs rejected a bid to extend free school meals in England during the half-term holiday, which has led to a lot of criticism and also to many businesses - both small and large - saying they will provide food for children as part of the campaign.

Pressure is growing on the government to reverse their decision, who says it has provided sixty-three-million pounds to councils to help those most in need.

Learn more about the campaign

Food banks, cafes, restaurants and chip shops around the country, are among many of the businesses who have offered to help.

Many local councils have also agreed to supply food vouchers for pupils including those in Manchester, Liverpool, Birmingham and Kensington and Chelsea. 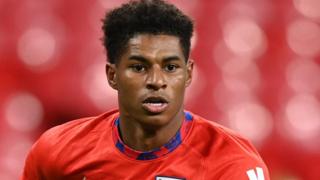 Reuters
Why did the government vote against extending free school meals?

MPs voted on Wednesday 21 October against extending the scheme in England throughout the holidays until Easter 2021.

Boris Johnson's Conservative government said there was already support available through the benefits system for families facing hardship and said that it has made billions of pounds available through local councils.

Rashford has been hailed a hero, with celebrities and politicians praising his campaign, but some Conservative MPs have accused him of "virtue signalling" to make himself look good in front of others, and argued that it isn't the government's job to feed pupils when schools are closed - it is the job of their parents.

However, some local Conservative councils are supporting Rashford's campaign, one government MP resigned from her role in protest about the vote and other senior Conservative MPS have said the government is getting it wrong and should change its mind.

In Scotland and Wales, the governments have extended free meals during school holidays until Easter 2021, while in Northern Ireland they will be provided over the half-term break this month.

Earlier this year the 22-year-old footballer persuaded the government to change its policy to allow 1.3 million children in England to claim free school meal vouchers during the summer holidays.

What has Rashford said?

The England striker who was made an MBE earlier this year for his charity work, said: "Even at their lowest point, having felt the devastating effects of the pandemic, local businesses have wrapped arms around their communities today, catching vulnerable children as they fell."