US Election 2020: Five key things about the final debate 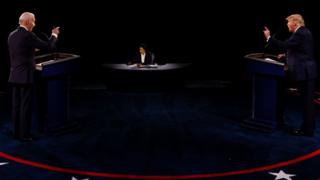 There are less than two weeks before Americans vote to decide who their next President will be.

On 22 October, the current President Donald Trump and his opponent Joe Biden had their second televised debate in Nashville, Tennessee.

They clashed over the economy, healthcare, race relations and climate change.

Here are five things you need to know about Thursday's debate.

Help - what do all the words mean?!

That's right - there are no more TV debates between Trump and Biden before the vote!

There were two altogether - the first on 29 September and then on the 22 October.

Another planned for the 15 October didn't go ahead.

The debates are really important in the run-up to the election campaign and are one of the few times the two candidates appear in the same space together. 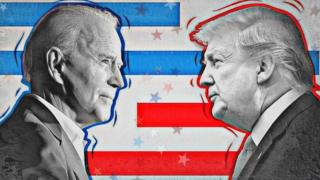 2. It was a lot calmer than the first two

It definitely wasn't calm, but compared to the first of their debates, it was a lot less angry and shouty.

The first ended in the two candidates throwing insults at each other.

This time the debate organisers muted the candidate who wasn't talking during the opening statements on each topic.

But Trump and Biden still clashed and launched personal attacks on each other.

Who are the US Presidential Candidates?

Find out more about Trump and Biden

The two candidates had very different answers and approaches to the covid-19 pandemic.

Mr Biden was asked about his support for more lockdowns if the scientists recommended it, and he didn't rule it out.

But Mr Trump said it was wrong to inflict further damage on the economy because of an infection that most people recover from.

He said that the virus is "going away" and that a vaccine would be ready by the end of the year, while Biden said the nation was heading towards "a dark winter". 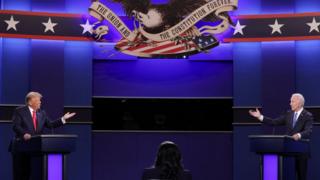 Getty Images
The presidential debates been happening for over 70 years and have been televised since 1956!
4. Who won this debate?

It's not really clear - both parties seem to think they've won.

But people on social media only have one clear winner - the host, Kristen Welker.

Welker is an NBC newsreader and the second black woman ever to host a general election presidential debate. She grew up in Philadelphia, Pennsylvania, and graduated from Harvard in 1998.

She was praised online for managing to keep the conversation under control. 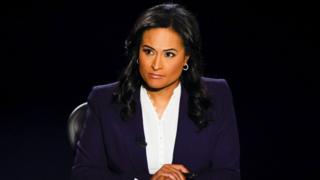 5. Will it make a difference?

It's unclear at this stage if this final debate will make any difference to the way people will vote, but experts suggest it won't.

Polls show that most Americans have already made up their minds about which candidate they're backing.

Lots of people are also using postal votes to make their choice this year as they want to avoid others at polling stations during the coronavirus pandemic.

It means more than 47 million people have already voted. However there are some concerns in the US, raised by Donald Trump, that these votes will not be counted properly.