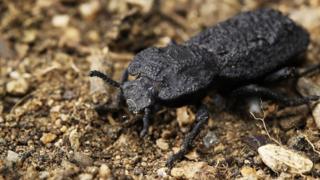 The diabolical ironclad beetle has a shell so tough it can be survive being run over by a car.

But why? New research shows that they have lots of tiny and tightly interlocked, impact-absorbing structures that connect pieces of the beetle's exoskeleton.

These little interlocked pieces look a lot like jigsaw pieces and work together to protect the beetle from the force.

Bugs: Why are they are so important to our environment?

Should we be eating more insects? Have your say!

Since the diabolical ironclad beetle can't defend itself by flying away, it developed a super-strong armour in its exoskeleton (shell).

David Kisailus, author of the study, said: "The ironclad is a terrestrial beetle, so it's not lightweight and fast but built more like a little tank."

They found that this beetle can take 150 newtons of force which is 39,000 times its body weight!

Three other species of terrestrial beetle could only take half of that.

The scientists doing the research wanted to find out more about what made the shell so strong, so they used a 3D image technique called microcomputed tomograph - a lot like an x-ray. 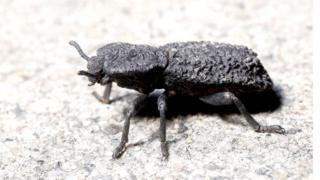 With this, they saw that even though this beetle has no wings, it does have something called elytra.

Elytra are the modified, hardened front wings of beetle and other bugs. And even though it can't fly, it had evolved from a beetle that could.

The diabolical ironclad beetle's elytra contain more protein than other beetles making it much tougher. The connecting bits of the beetle's shell are a lot like a zip on a coat. Those connections are stiff and resist bending under pressure.

Dr Kisailus said: "You can imagine the beetle's exoskeleton almost like two halves of a clamshell sitting on top of each other". 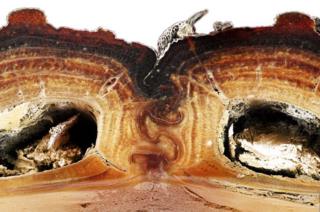 You don't tend to find these little guys trying to cross the road.

They live in Southern California's woodlands, so why do they need such a hard shell? Because it protects them from being eaten.

The shell can withstand a bird's beak and lizard teeth - it's super hard to crack.

It doesn't just protect the beetle from becoming dinner either. Insect collectors find it hard to store samples of diabolical iron clad beetles because pins won't go through the shells!

This beetle has been nicknamed 'Jaw breaker'

The researchers hope that by studying this super-strong beetle, it can help advance technology.

It could help make stronger aircrafts and inspire other parts of engineering!