Strictly Come Dancing: What will the first Strictly dances be? 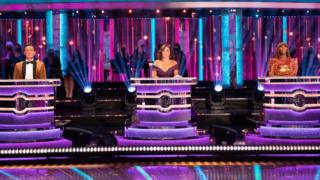 The battle for the Glitterball trophy begins this Saturday as the first live Strictly Come Dancing show takes place.

Twelve celebrities and their pro dancing partners will take to the famous dance floor in a bid to impress the judges and viewers at home, but they will all escape the public vote until next weekend.

But what will they be dancing to? We've got it covered.

Why are people talking about Billie Eilish's trainers?

Is a virtual Harry Potter reunion on the way?

Singer and YouTuber HRVY will be jiving with his partner Janette to Faith by Stevie Wonder feat. Ariana Grande.

Maisie Smith - from Eastenders and Gorka are set to samba to a song called...Samba by Gloria Estefan.

Olympic boxer Nicola Adams and Katya - the first ever same-sex Strictly pairing - are to quickstep across the floor to Get Happy by Ella Fitzgerald.

Actor Caroline Quentin will be dancing to the song 9 to 5 (Morning Train) by Sheena Easton in the dance style American Smooth with partner Johannes. 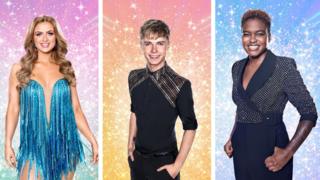 HRVY, Maisie Smith and Nicola Adams are all dancing this weekend!

Former politician Jacqui Smith and Anton will be foxtrotting to Always Look On The Bright Side Of Life by Monty Python.

Fan of the Paso Doble? Well Good Morning Britain's Ranvir Singh and Giovanni will be attempting this style to Beyoncé classic End of Time.

We'll be treated to another cha cha by Bill Bailey and Oti to the track Pata Pata by Miriam Makeba.

Reality TV star Jamie Lang and Karen will dance to the tune Think About Things by Daði Freyr and they'll also be doing the cha cha. Three cha chas in one night - what a treat!

American footballer Jason Bell will be trading in his football boots for dance shoes as he does the American smooth to My Girl with his partner Luba.

Former Royal Marine and sportsman JJ Chalmbers and partner Amy will be waltzing to What A Wonderful World by Louis Armstrong.

And last but not least, Max George from the band The Wanted and Dianne will attempt to tango, accompanied by the track Best Fake Smile by James Bay.

Are you excited to see the celebs strut their stuff on Saturday? Let us know what dance style you're most looking forward to in the comments below.

Strictly Come Dancing: The popular dance show is back on our screens!