What's 'ghost gear' and how is it affecting sea animals? 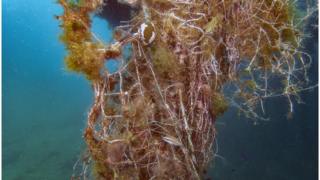 Up to a million tonnes of fishing gear known as "ghost gear" is being left on the ocean floor every year creating debris that's harmful to marine life.

Ghost gear is made up from abandoned fishing nets, lines and ropes. This can make up to a massive 10% of marine litter.

It's extremely harmful to sea mammals, affecting two thirds of them as they can become caught and stuck in the nets. These nets are not biodegradable, so they take decades and decades to break down.

If a material is biodegradable, it can be broken down by bacteria in the ocean, meaning it would eventually dissolve.

Sea turtle sightings down in the UK and Ireland 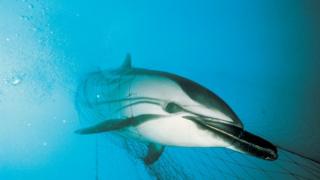 Getty Images
A Dolphin trapped in netting.
What is 'WWF' and what do they have to say?

WWF is the World Wide Fund for Nature. They are an international organisation that works to preserve wilderness and reduce human impact on the environment.

WWF have warned that ghost gear is very harmful to sea mammals due to it being plastic, and it's crucial to prevent this to help fight climate change.

Sarah Young, head of marine policy for WWF said "our ocean is the unsung hero in the fight for climate change. The earth would be 35C hotter without the ocean to protect us.

"By polluting our waters with plastic such as ghost gear, we are destroying wildlife and vital marine habitats that could help us tackle climate change." 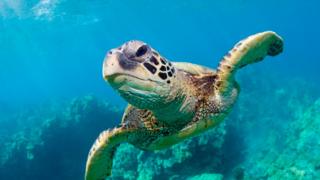 Getty Images
Protecting sea life is crucial to stop climate change.
How can we solve the problem?

The WWF want more governments to introduce rules that would lead to a reduction of ghost gear.

These measures could include improving the way countries dispose of fishing gear, better recycling, and including biodegradable fishing nets.