US election 2020: How coronavirus has changed the race for the White House

The 2020 US election is just days away, but the coronavirus pandemic has made this race for the White House different to any other.

This time last year, neither Donald Trump nor Joe Biden would've expected coronavirus to be one of the major issues that has dominated their election campaigns.

But now, President Trump's handling of the pandemic is something that Democratic rival Joe Biden is keen to remind the voting public of before the election on the 3 November.

Biden says Trump's response to coronavirus is an "insult" to its victims, especially as cases spike around the country.

Donald Trump says a vote for Joe Biden will mean more lockdowns, "no kids in school" and "no Christmas".

More on the US election: 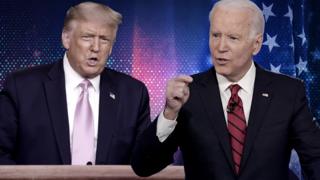 Getty Images
What's the situation with coronavirus in the US?

The US has seen over 200,000 people lose their lives to the pandemic, more than any other country and there are still thousands of daily cases.

But, President Trump says America is on the road to recovery.

"Under my leadership, we're delivering a safe vaccine and a rapid recovery like no-one can even believe," Trump said.

"If you look at our upward path, no country in the world has recovered the way we have recovered."

What do all the words mean?!

Earlier in the year, the president said he had tried "to avoid panic" and "perhaps" downplayed the seriousness of the virus, after the American news channel CNN published audio from February in which Mr Trump had privately said that coronavirus was "deadly".

"The president has no plan, he knew all the way back in February how serious this crisis was.

"He said he didn't tell us or give people a warning, because he didn't want to panic the American people. You don't panic, he panicked!" 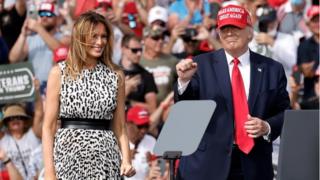 In reply, Trump defended his response to the virus, specifically his decision to close America's borders to people travelling from countries with high infection rates.

"If we would've listened to you, the country would've been left wide open," he said to Joe Biden.

"You didn't think we should've closed our country, because you thought it was 'terrible', you wouldn't have closed it for another two months," argued Mr Trump who then said he was quoting from White House coronavirus expert Dr Anthony Fauci, stating his actions had "saved thousands of lives". 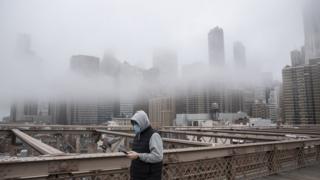 "Every time he's speaking he's got a mask, he could be speaking 200 feet away and he shows up with the biggest mask I've ever seen," said Trump.

But just days later the president became ill with coronavirus and his relaxed attitude to mask wearing became a real talking point in this election.

Having had coronavirus, I think President Trump has a better understanding of how to deal with it.

The state of Texas has the joint highest number of coronavirus cases, with over 900,000 people becoming infected since the start of the pandemic. Thirteen-year-old Raquell, lives in the Texas city of Houston, she says she's unhappy with Donald Trump's 'relaxed' attitude to coronavirus.

"He wasn't clear with us and he downplayed it, that is not good, he is the president," she told Newsround.

"Also, masks... He has encouraged people to wear them and not wear them. That's not professional."

However, in Long Island New York - another area which has been badly affected by the virus - 14-year-old Eddie believes Trump has done a 'good job' with the pandemic.

"Having [caught] coronavirus, I think President Trump is in a better place because he knows what the people who've had it went through," he said. "I think he has a better understanding of how to deal with it."

After being treated in hospital, Trump returned to the White House and told Americans not to let the virus "dominate" them. He returned to campaigning around the country less that two weeks after he became unwell.

He wasn't clear with us and he downplayed it, that is not good, he is the president

In his first rally in Florida after testing positive, Trump joked that he was healthy enough to give voters "a big fat kiss".

But his own White House coronavirus expert Dr Anthony Fauci told the BBC that Mr Trump's political rallies were bound to spread Covid-19. He said gatherings of people not wearing masks or socially distancing were potentially super-spreading events. 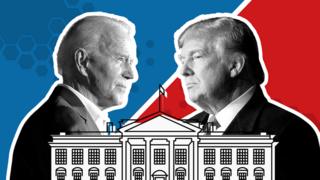 Due to coronavirus, more than 75 million Americans have decided to avoid long queues and crowds by voting early, with nearly 50 million of them choosing to do so by post.

The two presidential rivals' differences over the pandemic could be a big deciding factor when it comes to American adults picking a side they want to vote for.

Dr Clodagh Harrington is an Associate Professor in American Politics at De Montfort University in Leicester, speaking to Newsround she said that President Trump has had to face an incredibly difficult crisis, but for many voters, he could've dealt with it better.

"Trump's management of the public health crisis has had a negative impact on how some voters view him," she said.

"America has seen 228,000 deaths from the virus to date, with approximately 9 million Americans infected. No matter what a person's political persuasion is, this is major public health crisis that needs an urgent response."

President Trump has continued to campaign across America in key battleground states, crucial to the outcome of the election because they could go either way.

The president says states, which largely choose their own rules on pandemic restrictions, should avoid going into lockdowns.

However some of these states, including Texas and Arizona, have been badly affected by the pandemic.

At a rally in Goodyear, Arizona, Mr Trump warned that a Biden presidency would lead to more lockdowns and economic misery for Americans.

"If you vote for Joe Biden it means no kids in school, no graduations, no weddings, no thanksgivings, no Christmas, and no Fourth of July together.

"Other than that you'll have a wonderful life. Can't see anybody, but that's alright."

Dr Harrington believes this approach will appeal to core supporters, but will also go some way in convincing the doubters that Joe Biden is the right man for the job.

"Trump has been campaigning in-person in Arizona - holding rallies where attendees are not obliged to social distance or wear masks - and reassuring them that their state will 'remain open.' Some voters will be pleased with this approach, but others less so.

"In 2016, Trump attracted a lot of older voters and those who live in the suburbs. In 2020, may of those people have had, or know someone who has had Covid, so they are concerned and cautious about the virus," said Dr Harrington.

"If Biden/Harris win Texas, with its 38 electoral college votes, that would be an amazing turnaround as it's usually safe Republican territory." 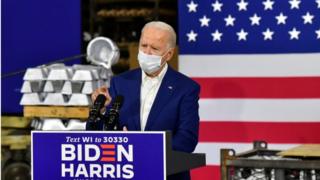 Speaking from his home of Wilmington, Delaware, Democrat Joe Biden said he would not campaign "on the false promises of being able to end this pandemic by flipping a switch".

Mr Biden - who has not ruled out further lockdowns - pledged instead to "let science drive our decisions".

"Even if I win, it's going to take a lot of hard work to end this pandemic," he said. "I do promise this: We will start on day one doing the right things."