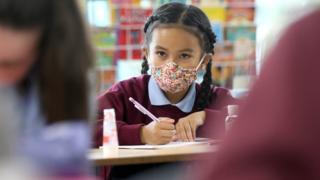 From Monday 19 October schools across Northern Ireland are shutting for at least two weeks.

It's because of a rise in coronavirus cases there and it's hoped closing schools will help bring down the numbers.

The closure includes the half-term holiday to reduce the impact on education. This means children will get a two-week break instead of just one.

But the closures are part of new tougher rules, which affect where and how many people can meet up who don't live together and they also mean restaurants have to be takeaway or delivery only.

Kids in Northern Ireland have been telling us what this means for their half-term holiday plans.

Students returned for the new school year at the end of August.

These new tougher rules aren't expected to last for as long as the lockdown which started in March.

The school closures will be reviewed on Monday 2 November.

If you live in Northern Ireland and your school is closed, how do you feel about it and what will you miss? How have the rule changes impacted your plans for the half-term break? Let us know by commenting below.

Northern Ireland school closures: 'We've done it once, so we can do it again'

Coronavirus restrictions: London and other areas moved to Tier 2