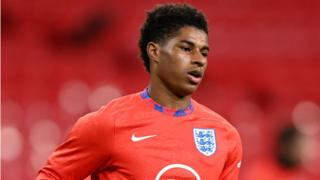 Marcus Rashford has said he will not give up his fight for free school meals after his petition to extend the provision during holidays was rejected by the government.

He is asking for more to be done to stop children going hungry by increasing the number of pupils who are able to get free school meals and also offering them free food and activities during school holidays in England.

A Number 10 spokesperson said: "It's not for schools to regularly provide food to pupils during the school holidays. We believe the best way to support families outside of term time is through universal credit rather than government subsidising meals."

Speaking on social media about the rejection of his petition, Rashford said: "This is not going away anytime soon and neither am I..."

Schools in Northern Ireland to close for two weeks

In June, he successfully campaigned for the Government to change its mind on providing free food vouchers for families that struggled to afford meals over the summer holidays.

It meant that the parents of 1.3 million children in England were able to claim vouchers during the time off school.

The England striker has since teamed up with some of the UK's biggest supermarkets to set up a child food poverty task force which aims to get the government to provide more support to struggling families.

"For too long this conversation has been delayed. Child food poverty in the UK is not the result of Covid-19. We must act with urgency to stabilise the households of our vulnerable children," he said.

Rashford, who has recently been given an MBE for services to vulnerable children, said: "Whatever your feeling, opinion, or judgement, child poverty is never a child's fault."

"Right now, a generation who have already been penalised during this pandemic with lack of access to educational resources are now back in school struggling to concentrate due to worry and the sound of their rumbling bellies," he added.

Some new research from the charity, Food Foundation suggests that nearly a fifth of of 8-17 year olds reported experiences of food difficulties over the summer holidays. That's the equivalent of 1.4 million children.

A government spokesperson said: "We have taken substantial action to make sure children and their families do not go hungry, extending free school meals support when schools were closed, extending our welfare support by £9.3 billion and funding councils to provide emergency assistance to families for food and other essentials.

"We are grateful to Marcus Rashford for his work shining a light on the significant challenges families are facing at this time."

The Big Question: What would happen if a rocket hit a star?