US election 2020: Trump back on election campaign trail less than two weeks after testing positive for coronavirus 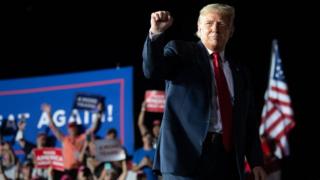 US president Donald Trump is back on the election campaign trail less than two weeks after testing positive for coronavirus.

He spent three nights in hospital and underwent treatment for the virus but his doctors have now said he is not contagious. They said his most recent tests were negative, but specific dates of the tests were not revealed.

Mr Trump met thousands of supporters at an outdoor rally in Sanford, Florida on 12 October. It is the first of four planned campaign stops over the next four days.

The president is hoping to get more votes than rival Joe Biden. The election is in three weeks on 3 November.

Want more on US politics?

What did the president say in Florida? 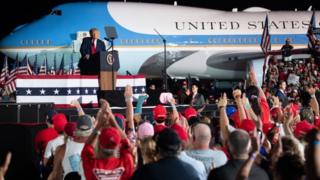 Mr Trump spoke to a crowd of several thousand people - many of whom were not wearing masks.

He spoke about coronavirus restrictions and how he was against them.

Joe Biden, who is representing the rival party - the Democrats in the presidential campaign, criticised the president for "reckless behaviour" and not encouraging people to wear masks or stick to social distancing guidelines.

At the moment, the polls - which are used to predict the potential outcome of an election - suggest that Mr Biden is in the lead. But Florida is a key state in the election, so Trump is focusing his efforts on winning there.

He will also travel to events in Pennsylvania, Iowa and North Carolina later this week.

Mr Biden is due to appear in Florida on Tuesday.