Exams in England delayed but still going ahead in 2021 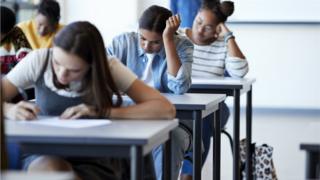 Next summer's A-levels and GCSEs in England are going ahead - but with some reduced content and a start date pushed back by three weeks.

Most exams will now start from 7 June, rather than mid-May, in an attempt to make up for lost teaching time.

However, head teachers were angry with the proposals and lack of information given by the government about what will happen if exams can't go ahead. 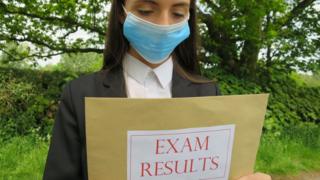 Exam boards said the later start would mean a more "compressed" exam timetable, with the same number of exams being taken across a shorter number of days.

And heads' union leader Geoff Barton described the delayed start date as having "marginal benefit", as the three extra weeks of teaching and revision time is far outweighed by the months of lost teaching time from the pandemic.

Mr Williamson said: "Exams are the fairest way of judging a student's performance so they will go ahead."

"Students have experienced considerable disruption and it's right we give them, and their teachers, the certainty that exams will go ahead and more time to prepare."

The announcement for England doesn't go as far as Scotland, where last week exams for National 5 qualifications were cancelled, replacing them with teacher assessments and course work, while still going ahead with Higher exams.

In Northern Ireland, exams are going ahead but with reductions in course content and a delayed starting date - plus the promise of a back-up plan. 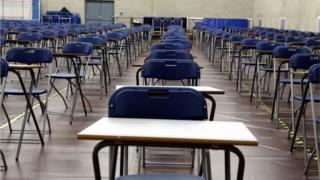 Your guide to exams: 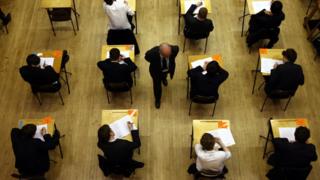 The General Certificate of Secondary Education - or GCSEs for short - is an academic qualification taken in England, Wales, and Northern Ireland.

The majority of students will take 9 to 10 GCSE exams. English, Maths and Science are compulsory subjects.

The exams take place the end of Year 11 and in England they are graded 9 to 1. The highest grade is 9, while 1 is the lowest.

GCSE courses now include much less coursework than before, with grades in almost all subjects depending on exams.

In Northern Ireland, GCSEs are graded from A* to G, including a C*. But students may also get results with grades 9-1 if they take exams set by English boards.

Wales also grade GCSEs from A* to G. 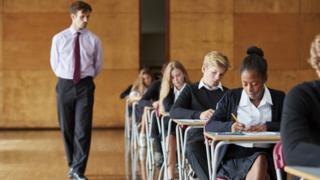 Mock exams are practice exams that usually take place midway through the academic year or term.

They allow students and teachers to check what has been learnt and identify areas for improvement. The marks for mock exams may or may not count towards your final grade.

What are A Levels? 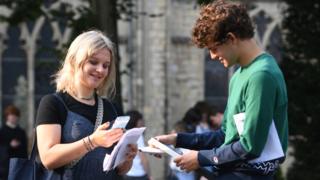 A-levels are advanced qualifications offered by schools and colleges in England, Wales and Northern Ireland. Unlike GCSEs, they are not compulsory.

A student will commonly study for A-levels between the ages of 16 and 18, following the completion of secondary school. Students sit all A-level exams at the end of two years of study.

Traditionally, a student will take between three and four subjects, tailored towards appealing to the universities they want to go to.

Universities in the UK use the results to determine who they want to accept.

What is a BTEC? 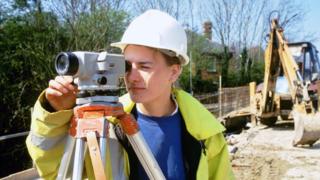 There are over 2,000 BTEC qualifications across 16 sectors - from construction to performing arts, from hospitality to travel and tourism.

You can study a BTEC from entry level to Level 2 which are similar standard to GCSEs.

A Level 3 BTEC National is a similar standard to A levels and can lead to employment and further education. 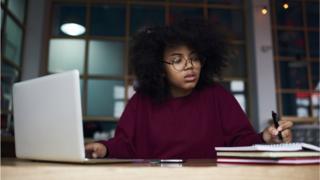 Coursework is written or practical work done by a student during a course which will count towards a final grade.

In recent years the amount of coursework students do during GCSEs and A level has been significantly reduced.

No A level subject will have more than 20% coursework and most courses are assessed entirely through exams.

There is no coursework or controlled assessment for most GCSE courses, apart from practical subjects like drama, dance and art.

What are Scottish Nationals and Highers? 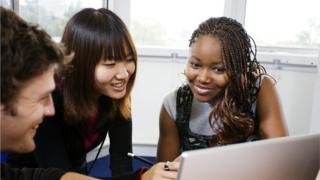 National 5 exams in Scotland are the equivalent to GCSEs and are taken by 15 and 16-year-old pupils.

Higher and Advanced Higher qualifications are more like A levels.