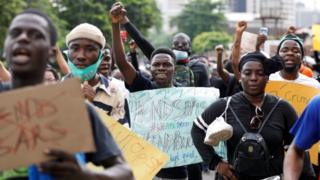 Reuters
Sars is said to have mainly targeted young men

Nigeria's Special Anti-Robbery Squad (Sars) which, up until recently, was part of the country's police unit, has been broken up after widespread protests.

Thousands of protestors took part in demonstrations over the weekend and called for Sars to be brought to an end. Demonstrations against the squad were sparked by a video of a man allegedly being killed by police.

The Nigerian government announced that Sars had been dissolved on Sunday, which means the police unit no longer exists. Nigeria's chief of police said a team of investigators would be set up to investigate alleged abuses by Sars.

More of the latest stories

Why could there be pieces of Venus on the Moon?

Virtual high school tours: Are they working for you?

How did it all start? 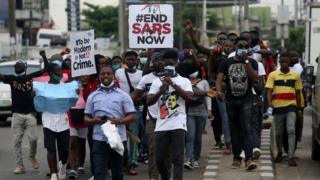 Sars was first formed in 1992 to help tackle crime in Nigeria, However, it has been accused of abusing its powers and many Nigerian citizens have been calling for it to end for a long time.

The unit is said to have mainly targeted young people, in particular men from low income backgrounds who appeared "flashy". Sars was accused of harassment, wrongful arrests and stealing peoples' money and property, including laptops and phones.

The human rights charity Amnesty International said those between the ages of 17 and 30 were most at risk of being arrested, beaten, stolen from or mistreated by Sars.

What caused the recent protests? 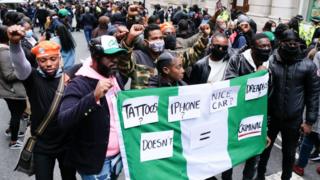 Getty Images
Demonstrations were also held in London over the weekend

Lots of people have recently spoken out against what's been going on in Nigeria on social media and many have also joined in with physical protests.

The hashtag #ENDSARS was trending in both the UK and America on Twitter for several days last week.

Popular Nigerian musicians including Wizkid, Davido and Mr Eazi joined in with demonstrations.

"Nigerian youth, don't let anyone tell you you don't have a voice," singer Wizkid said during a protest in London on Sunday.

The artist called for a "new Nigeria" where people would not be "scared to speak our mind again".

British-Nigerian actor John Boyega also used his platform to call for the end of Sars.

He said young people in Nigeria deserve "good leadership and guidance" and urged people to pay attention to what has been happening in the West African country.

How have the Nigerian authorities responded? 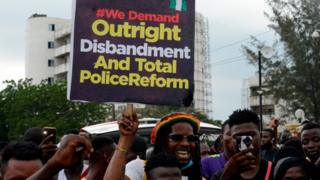 The Nigerian authorities have now said Sars is no longer in operation. The news has been welcomed by many, however, lots of people say the issues around police brutality and the poor treatment of Nigerian people extends to the wider police force.

Some also question the impact the latest actions around Sars will have. The unit was re-organised back in 2017 after Nigerian citizens called for Sars to be brought to an end because of the its mistreatment of citizens. However, many say little has changed since then.

Some people have also expressed dissatisfaction as the officers who were part of Sars have been redeployed, which means they'll still be working in other areas of the Nigerian police force.

It is unclear whether any of the Sars members accused of abusing their power will be prosecuted, something that Amnesty International says is vital to get justice for the alleged victims.

The authorities are looking into what will replace Sars.