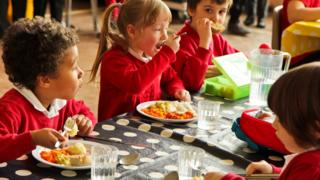 Newsround has been told that the quality of school food has dropped since September, causing concerns to be raised around the quality of what children are eating.

When schools reopened in September, they had to put in place new ways of doing things to help stop the spread of coronavirus.

These new rules impacted on school dinners and some schools have struggled to adjust to the new system.

Anne Longfield, the Children's Commissioner for England, told us: "It's really worrying to hear that some children are not receiving a hot meal at school [and] that sometimes the portions are much smaller."

School Health UK - a company that provides lunchtime programmes to schools - also told Newsround that "many pupils are eating in classrooms and aren't having a school meal, as often they are being served colder options which are poor." 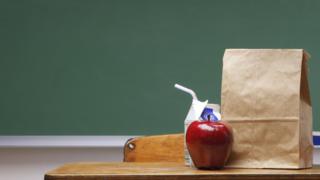 We have also spoken to Child Poverty Action Group - a charity which campaigns to help children in need, who told us: "Pupils should be getting enough food at school to enable them to learn, particularly children from families in poverty."

Have your school dinners changed? If you eat them in school - are they hot or cold?

Take part in the vote

Or let us know in the comments below

What are the issues?

Every school has been impacted differently and some have experienced more challenges during lunch time than others.

Many schools have introduced a staggered lunch time so that different groups or 'bubbles' don't mix.

This has led to rushed or extended lunchtimes in some schools and some children aren't receiving hot meals.

How will school be different in September?

Why some schools are already closing due to coronavirus

Do YOU think schools should do more outdoor learning? 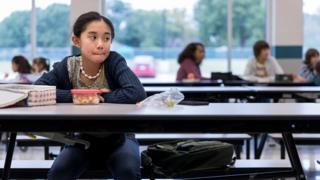 SDI Productions
School food has changed a lot since September

Paul Evans from School Health UK told us there are some instances where children are eating lunch as early as 11am and as late as 2pm.

He went on to say that "some children have been given a cheese sandwich every day since school started in September and the quality is at rock bottom. The food standards are being ignored and that is impacting on kids nutrition."

Although there is no requirement that lunches must be hot meals, hot lunches should be provided wherever possible to ensure that all pupils are able to eat at least one hot meal every day.

Although school dinners in England are the responsibility of school governors, there are minimum standards set by government which must be met.

According to the guidance from the Department of Education hot meals aren't required but should be provided wherever possible.

Newsround asked the Department what children should expect and they told us: "Schools and their caterers are required to follow the School Food Standards to ensure that all children are able to access a healthy, nutritious meal while at school.

"Teachers and all school staff have gone to extraordinary lengths to get children back into school, and schools have been implementing protective measures - including staggering break and lunchtimes - which are designed to reduce risks of transmission." 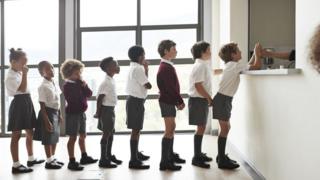 Getty Images
Do you still have hot dinners at school?

The Welsh government also told us that the rules don't say children have to have a hot meal.

They said that the duty is on local authorities and school governors to "satisfy themselves that they are complying with their duties under the Healthy Eating in Schools Regulations."

The same applies in Scotland. The Scottish government told us "local authorities are responsible for the provision of school meals" and it doesn't need to be a hot meal.

A Department of Education spokesperson in Northern Ireland told us that school dinners should meet nutritional standards and should be good enough to be the main meal of the day.

"As we all generally expect our main meal to be a hot one it is therefore expected that a hot meal will be available for free school meals pupils and other pupils.

"This is particularly important for pupils entitled to free school meals for whom this might be their only meal that day. Initially on the reopening of schools there may be a reduced choice of menu available, however, the aim is to provide hot food menus offering a choice, served in school dining halls as before."

What are charities saying? 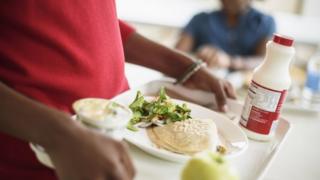 School Food Matters, a charity that campaigns for healthy food in schools, told Newsround: "Government guidance is clear - school meals must meet the school food standards. The funding is still flowing in to schools... so we would urge heads and caterers to work together to deliver the best service for their young people."

Due to coronavirus, Anne Longfield, the Children's Commissioner for England, said she accepted that "some schools have had to change the layout of school or cut the amount of time children have for lunch. Schools, teachers and children are all working really hard to make things work and some things are different at the moment. But I think it is really important that every child is able to have a hot meal at school every day, if they want one."

She also told Newsround that she will be looking into the issue and said: "I will be writing to the Government asking them what more they can do to make sure that happens, including for those children who normally receive a free school meal but are at home because they have had to self-isolate."

There are also concerns around the lack of hot food on offer, as for some children that might have once been the only hot meal they'd have a day.

Paul Evans from School Health UK criticised the low quality lunches on offer in some schools and told us that "many schools are either not having school meals on site or school meal providers are just providing lower quality 'cold options'." 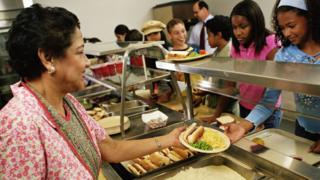 Lorna Nicoll, from the charity Children North East told Newsround: "There is an overwhelming responsibility and pressure on schools and their leaders at the moment. The issues are different in every school - ranging from limited space for everyone to have their lunch to extended lunch times.

However, some schools have been creative and offered pizzas or a pasty and not just sandwiches - it's still cold options but some caterers are putting thought in. One school we work with has also started introducing hot dinners again. The situation is ever changing."

Have your school dinners changed? If you eat them in school - are they hot or cold? Let us know in the comments below.

Back to school: Advice from Dr Radha

Coronavirus: Has your school had to send people home or close?

147 comments
Back to top
unknown