Halloween: How to boss it this year despite coronavirus

It's that time of year again where everything gets a little bit spooky.

That's right it's Halloween, aka the scariest night of the year! It is celebrated on 31 October.

And even though coronavirus means you might not be able to go out trick or treating, there's still plenty of things to do to enjoy this spooky time of year!

Here is everything you can do to make sure you still boss Halloween in 2020.

What is the latest with coronavirus?

What are the coronavirus rules? 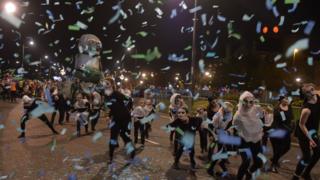 The rules around restricting the spread of coronavirus are changing all the time and are different depending on where you live in the United Kingdom.

If your area is in Tier 1, up to six people of any age from multiple households can meet indoors for a Halloween party.

However, this isn't allowed to happen in areas that in are Tier 2 or Tier 3. Instead, any Halloween party inside can only be with people from in your household or support bubble.

If your area is in Tier 2, you're allowed to have six people in your garden. Although you'll need to wrap up warm because it's sure to be chilly!

You can check what Tier you're in on the government website. Currently, the areas in Tier 3 are:

At the moment, there has been no announcement on whether trick or treating will be banned completely in England.

Instead, the government has said people should avoid doing any Halloween activities which might involve handling items from other households, when it may not be easy to wash hands.

In Scotland, people are being told not to visit other households or other private indoor spaces.

There is no current ban on outside activities like trick or treating.

First Minister Nicola Sturgeon said last month that she would not rule it out a ban if necessary to keep children safe.

First Minister Mark Drakeford said that all Halloween and Bonfire Night celebrations will be cancelled.

That's after Wales announced a two-week lockdown to help stop the spread of the virus.

In Northern Ireland, any mixing of households indoors is not allowed. However, six people from two households can gather in a private garden

The Health Minister, Robin Swann, has said children should avoid trick or treating and instead do Halloween activities that don't involve walking round streets or neighbourhoods.

The annual Derry Halloween festival - which usually draws thousands to the city and is billed as the biggest Halloween party in Europe - has been cancelled.

What CAN you do this year to boss Halloween?

Even if trick or treating is off the table this year, there are still plenty ways for you to absolutely boss Halloween!

This is one Halloween tradition that's as safe and fun as ever.

As always, just be careful to avoid pumpkin carving injuries. You can draw a face with markers. Then your parents can do the cutting.

When the carving is done, consider putting a battery-operated light rather than an open-flame candle inside.

Roast the seeds from the pumpkin for a healthy snack!

Why not make some fun Halloween treats as a family?

Decorate a pizza with toppings in the shape of a jack-o'-lantern, for example, or make pumpkins out of tangerines!

You can do this by peeling the tangerine and sticking a thin slice of celery on top to look like a stem.

You could even bake some spook-tacular cakes or buns, with green and orange icing. 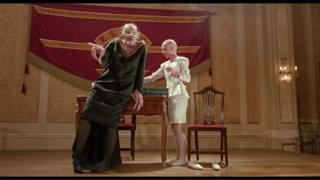 Warner Bros
The film adaptation of Roald Dahl's book, The Witches, will give you the serious heeby jeebies!

It isn't Halloween without a super scary film.

So, grab the popcorn, turn out the lights and settle into a scary movie marathon.

You could even dress up as your favourite movie character to really get into it.

Host a Halloween-themed costume or dance party on Zoom for friends and family.

Create a positively haunting playlist and get everyone to show off their costumes on camera.

You could even do some virtual apple bobbing, seeing who can pick up the most apples with their mouths in a minute!

Halloween: Where did our modern traditions come from?

113 comments
Back to top
unknown