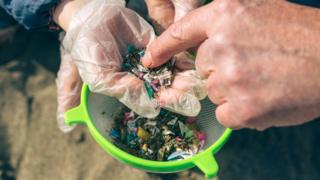 There are 14 million tonnes of microplastics on the ocean floor around the world, say scientists.

It's believed to be the first time an estimate's been made of how much tiny plastic there is deep at the bottom of our oceans.

Scientists from CSIRO, Australia's government science agency, used a robotic submarine to take samples of the ocean floor about 300km away from Australia.

Then, by seeing how much microplastic was in these samples, they estimated how much there would be in the ocean floors all around the world.

Microplastics are small pieces of plastic 5mm wide or less, that mostly come from larger plastic items breaking apart into smaller pieces. Microplastics can be harmful to sealife. 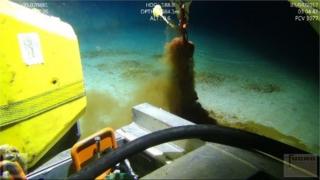 CSIRO
Samples from the ocean floor were collected by robotic submarines

As microplastic pieces are so small, 14 million tonnes can contain billions of tiny individual particles.

The scientists from CSIRO found that the amount of microplastic pieces on the ocean floor was generally higher in areas where there was also more floating rubbish in the water above.

There could be 200 million tonnes of plastic in the Atlantic 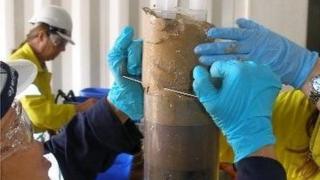 But while 14 million tonnes may seem really big, Dr Denise Hardesty, one of the scientist doing the research, said it was actually small compared to the amount of plastic that's believed to be entering the oceans each year.

She also said much more is being trapped on land than at sea.

Microplastics: Billions of tiny pieces of plastic are covering the seabed

There could be 200 million tonnes of plastic in the Atlantic, according to new research