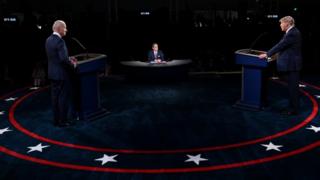 American president Donald Trump took on Joe Biden in their first debate in Cleveland, Ohio ahead of the US election which takes place on the 3 November this year.

It was an opportunity for American citizens to hear directly from the presidential candidates on a range of important issues.

President Trump and Mr Biden shared their views for 90 minutes on a number of different subjects including the coronavirus, racism and the economy.

Here's more on what happened.

More on the US election 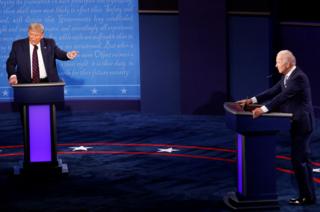 For many people the mood of the event was what stood out - it was angry and at times nasty with lots of name-calling.

There was lots of shouting and the candidates frequently spoke over one another, despite moderator Chris Wallace's attempts to keep the peace.

Mr Biden said Mr Trump was "the worst President America has ever had" and said: "Everybody knows he's a liar."

Mr Trump attacked Mr Biden's family and kept interrupting and talking over Mr Biden which led to Biden telling him to "shut up" and calling him a "clown". 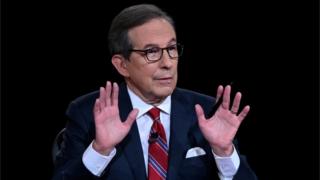 Reuters
Fox News anchor Chris Wallace asked the candidates lots of questions during the debate
What was said about the coronavirus?

Mr Trump defended the actions he's taken in dealing with the coronavirus outbreak in the US and he also referred to a vaccine becoming available in the near future.

"I spoke to the scientists that are in charge, they will have the vaccine very soon," the president said. 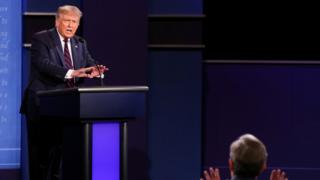 Reuters
There was lots of arguing and shouting throughout the debate

However, rather than talking to Mr Trump, Mr Biden looked straight into the camera and urged the American people watching to ask themselves whether they really trust Mr Trump.

He accused the president of not telling people the truth about the coronavirus and failing to take steps to tackle it on time.

Racism was also another big topic debated by the presidential candidates.

They argued over the death of George Floyd and the protests that have taken place in many states across the country. 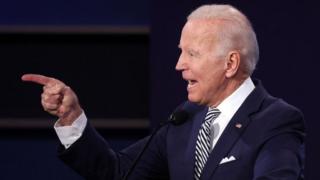 Mr Biden accused the president of creating division and hatred while Mr Trump complained of violence in cities and clashes between protestors and police.

Mr Trump has also been criticised for not rejecting and speaking out against groups that promote racist views.

What about the economy? 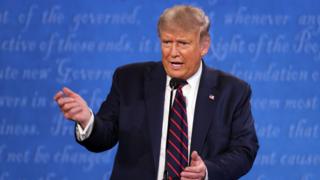 Getty Images
Mr Trump promised the US economy would bounce back

Mr Trump praised what he and his administration have done for US jobs since he came into power and said the economy will bounce back from the damage caused as a result of the pandemic.

He also accused Mr Biden of not achieving much to make things better for America, despite being in politics for 47 years.

However, Biden argued that Trump has actually made things in the US worse and he also accused the president of not paying his fair share in taxes.

Quiz: How well do you know your US presidents?

Donald Trump: Five things that happened during his latest speech

76 comments
Back to top
unknown