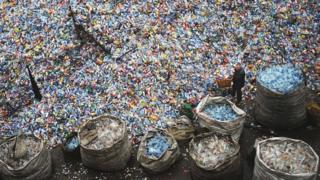 Scientists have supercharged how a plastic-eating bacteria gobbles up plastic - and it could help solve the pollution problem.

The bacteria was found in 2016 but now scientists have taken what it does and made it work much faster.

An enzyme is what helps the microscopic bugs to digest its food. The scientists have taken this enzyme, attached it to another and created a super-enzyme, which can convert plastic back to its original material in just a few days.

This is much quicker than the natural way plastic breaks down which can take hundreds of years.

Scientists believe this could be a big step forward to help the plastic pollution situation. 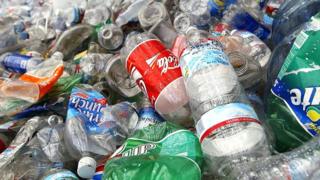 Getty Images
How did they discover it?

The scientists accidentally found one of the enzymes and discovered it could break down plastic in days.

They then used genetic engineering to connect this enzyme with a second one, Professor John McGeehan, one of the scientists, said it was like "two Pac-men joined by a piece of string".

They found that by putting them together "the digestion of the plastic bottles literally doubled. This allowed us to create a super-enzyme six times faster than the original enzyme alone".

What is an enzyme? 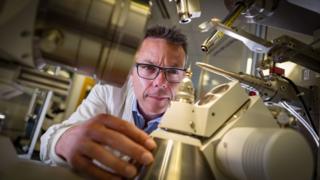 University of Portsmouth/Stefan Ventur
Professor John McGeehan has been working on this 'super enzyme' which will hopefully help the pollution problem
Why is this good news?

"This is quite a significant leap forward because the plastic that ends up in our oceans today is going to take hundreds of years to break down naturally," Prof McGeehan said.

"Eventually, through sunlight and wave action, it will start to break down into smaller and smaller pieces - and we will end up with microplastics, which is a serious problem for the organisms that live in the environment."

But the super-enzyme removes the plastic completely in days.

This new discovery means plastics could be made and reused all the time which would reduce our use of fossil resources such as oil, which are used to make plastic.