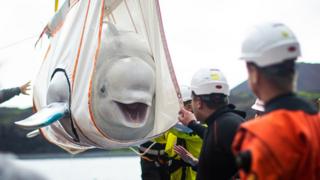 Two beluga whales have taken their first swim in an open water sanctuary.

Little Grey and Little White are being looked after in Iceland after being captured and made to perform for years.

They have now been able to explore their natural surroundings of Klettsvik Bay, which is on an island in Iceland.

One million species facing extinction in next 100 years say WWF

The charity, Sea Life Trust, have been caring for the whales at the world's first open water sanctuary for belugas in Iceland.

The whales have made good progress since being at the care pools in August and this open water swim will be carefully managed to help ease them into the wider sanctuary.

They will return to the sanctuary care pools over a short period of time and their health and well-being will be assessed on a daily basis. 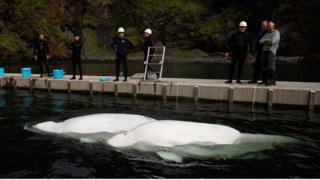 Head of Sea Life trust, Andy Bool, said: "We're absolutely thrilled by the progress that Little Grey and Little White have made since moving to their bayside care pools."

We are introducing them gradually to the bay in little steps, but seeing them swim together and deep dive amongst the flora and fauna of the wider bay for the first time was amazing to witness and gave us a real sense that Little Grey and Little White are enjoying being back in the sea.

Little Grey and Little White will be on TV soon too!

Their journey back to the ocean will be part of a documentary that will be on ITV in October.

Belugas make a whale of a journey to new home