Hero rat gets medal for clearing landmines in Cambodia

Meet Magawa, a rat that hunts for explosives in Cambodia and is officially a hero.

'HeroRAT' is actually Magawa's job title and it's a pretty accurate description - his work is dangerous and involves searching for, and finding landmines.

Now Magawa's amazing efforts are being recognised for improving the lives of people living in the country and it's that life-saving bravery that means he is now being given a special medal in recognition.

Magawa's handler, Malen, met him on the day he arrived in Cambodia. She says she always knew he was a special rat:

"He's smart, quick and never misses a trick. He has saved the lives of many people. I hope that one day we can clear all the landmines in Cambodia."

"We've been working together for more than four years now, and I'm so proud of him. He's very special to me," she said.

How much!? World's most expensive sheep sold

Cambodia has seen decades of fighting, leaving the ground littered with hidden explosives; there are thought to be six million landmines in the country.

Magawa's job is to find them before they hurt anyone.

When searching for dangerous objects, Magawa knows to ignore scrap metal and is extremely quick at finding mines. He can search an area the size of a tennis court in half an hour - something that would take a human with a metal detector up to four days! 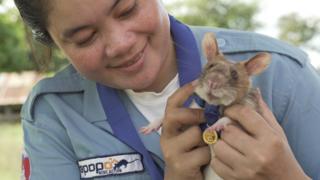 Magawa is an African giant pouched rat, he was born in Tanzania and is 7 years old. He weighs about as much as a bag of sugar and head to tail is 70cm (28in) long. While that is bigger than many other rat species, Magawa is still small enough and light enough that he does not trigger mines if he walks over them.

Once he finds the explosives he scratches on top of them to alert his humans.

Although there are other HeroRats, Magawa is one of the best! He has found 67 explosives so far, clearing land that's the size of 20 football pitches. It means people can now live and work on that land, safely and free of worry.

It's all that hard work that means this hero rat is now following in the footsteps, sorry, pawsteps of several other animals, receiving the People's Dispensary for Sick Animals Gold Medal - the animal version of the highest military honour for bravery in the face of danger.

Dogs, cats, horses and pigeons have all been given the award, but Magawa is the first rat to ever receive the medal since the charity began honouring animals 77 years ago. 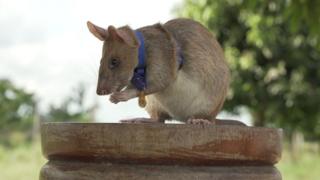 "Magawa's work directly saves and changes the lives of men, women and children who are impacted by these landmines.

"Every discovery he makes reduces the risk of injury or death for local people," she said.

It's not all hard work though, Magawa likes to relax at the weekend with a nice slice of watermelon. He stays in shape by working out on his running wheel and enjoys taking the occasional nap.

Beached whales: Rescuers in Tasmania are working to save beached pilot whales