Beached whales: Rescuers in Tasmania are working to save beached pilot whales 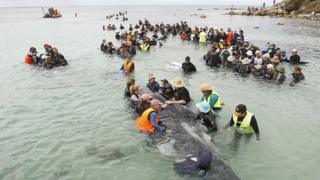 Rescuers are working quickly to help save as many pilot whales as possible after a mass beaching on a shore in Tasmania, an Australian island.

Since Monday, an estimated 470 of the sea creatures have been discovered stranded on the west coast of Tasmania.

Teams of experts are working hard to save any animals trapped in in shallow waters, but many have sadly died.

Jellyfish and chips - should more people be eating it? 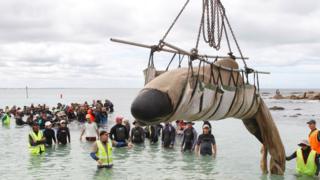 Since Monday rescuers have been fighting to save a pod of 270 whales.

Then on Tuesday a helicopter discovered another 200 whales about 10km away in the same harbour. 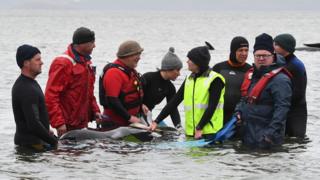 BRODIE WEEDING / POOLL
Volunteers are helping to save the beached whales

Although 25 whales from the first group were freed on Tuesday, some had beached themselves again after being brought in by the tide, according to officials.

Rescuers don't know exactly what drew the whales to the shore, but scientists say pilot whales in particular have very strong bonds.

Pilot whales are the most common to become beached. They can grow up to seven metres long and weigh up to three tonnes.

Why do whales get beached?