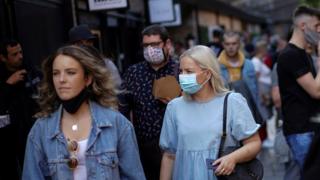 The government's top scientists have warned that the growing number of coronavirus cases in the UK "is all of our problem", and that "the next six months need to be taken very seriously".

They said that the number of coronavirus cases is rising, doubling roughly every seven days.

They added that, if this continues without being stopped, the UK could see 50,000 new cases per day by mid-October.

What's happening around the UK?

England: The Prime Minister is expected to set out new restrictions on Tuesday 22 September, but it isn't thought these will affect schools or workplaces.

Northern Ireland: From 6pm on Tuesday 22 September restrictions will be extended across Northern Ireland meaning people who don't live together can't mix indoors. First Minister Arlene Foster said: "Doing nothing was not an option but neither is returning to full lockdown".

Scotland: First Minister, Nicola Sturgeon has said it is almost certain that tighter restrictions will be put in place within the next couple of days.

Wales: The counties of Bridgend, Merthyr Tydfil, Newport and Blaenau Gwent will be placed under a local lockdown from 6pm on 22 September. People can only enter or leave those areas for things like going to work or school. 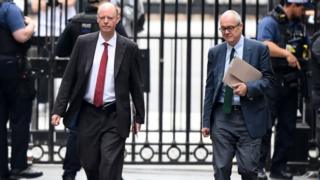 It's as the Prime Minister considers whether to introduce further restrictions in England.

There are different rules in Northern Ireland, Scotland and Wales, and Boris Johnson is due to chair an emergency Cobra meeting with their leaders on Tuesday.

On Sunday Boris Johnson met with Prof Whitty, Chancellor Rishi Sunak and Health Secretary Matt Hancock at Downing Street to discuss what their next steps should be.

On Friday the government introduced further restrictions across the north-east of England, including big cities like Newcastle, and tighter restrictions are also being considered in other parts of the country. 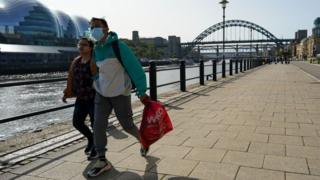 Getty Images
In the north-east of England people aren't allowed to meet other households, and restaurants and pubs have to shut at 10pm

Prof Chris Whitty says that although very high rates of transmission in the UK are concentrated in some areas, there are also high rates elsewhere.

He added: "This is not someone else's problem, this is all of our problem."

Prof Whitty says there are things which can help tackle the virus:

At the briefing, Sir Patrick Vallance showed examples of what has happened in other countries - with an increase in cases in France and Spain among younger age groups also leading to an increase among the older population.

There are other countries around the world where there have been tougher rules and where things are now starting to improve though.

For example, in New Zealand, Covid measures are going to be removed everywhere except in the biggest city of Auckland, where some restrictions will continue for another two weeks.

In Australia some areas have had stricter rules than others and they are now beginning to be eased again, after a drop in the number of cases. 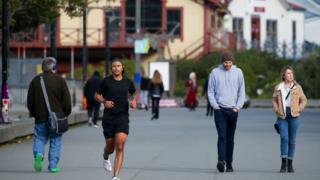 The UK government also has concerns about the impact of the autumn and winter when it comes to the spread of the virus.

Prof Whitty said "the seasons are against us", warning that cases of the virus could get worse with the UK coming into the autumn.

He said: "We are now going into the seasons...that benefit respiratory viruses."

He added that it will be a "six-month problem that we will have to deal with collectively...This period of the next six months needs to be taken seriously".

Sir Patrick said good progress was being made when it comes to vaccines, with a range of them being developed.

The UK is thought to be in a good position too when it comes to supply, if a successful vaccine is developed.

Sir Patrick said he hoped there will be a vaccine of some kind by "the end of the year for small amounts for certain groups".

Coronavirus: What does a rise in UK cases really mean?

Contact tracing: What's the latest on the NHS app?