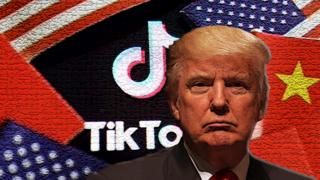 President Trump has given his "blessing" to a deal that could save TikTok in the US.

The President had said he would ban downloads of the app in the US from 20 September, however the US Commerce Department said this deadline has now been delayed until 27 September in the "light of recent positive developments".

Donald Trump told reporters he had approved a deal "in concept" that would see a partnership between ByteDance (who own TikTok) and US companies Oracle and Wallmart.

"The security will be 100%." said President Trump after US officials and politicians were concerned that users' personal data was being collected by ByteDance, and possibly passed on to the Chinese government.

The current TikTok chief executive Vanessa Pappas, posted a video on Saturday saying that the app was "here to stay" in the US.

TikTok has 100 million users in the US and the country is also home to one of its biggest stars, Charli D'Amelio, who has 87 million followers.

However, the app is owned by Chinese firm ByteDance and Donald Trump has described TikTok along with WeChat, which is also Chinese owned, as a 'threat'.

A statement from the US Commerce Department said:

"The Chinese Communist Party has demonstrated the means and motives to use these apps to threaten the national security, foreign policy, and the economy of the US.

"While the threats posed by WeChat and TikTok are not identical, they are similar. Each collects vast swaths of data from users, including network activity, location data, and browsing and search histories."

It comes after it was revealed in June that more than 50 apps, including TikTok, were found to be recording the text that users have been copying and pasting on Apple iPhones and other devices.

The app was also banned in India recently, along with 58 other apps, with the Indian government claiming it is a threat to the country's national security.

However, TikTok has said it would never share user information with Chinese authorities.

Under President Trump's executive orders, new laws meant companies in the US could no longer work with TikTok and WeChat.

However TikTok owner, ByteDance has until the 12 November to sell its US operations to another company.

ByteDance is currently in talks with US technology firm Oracle and others to create a new company in the US, called TikTok Global, with the aim to address the concerns over users' data on the app.

This potential new deal between ByteDance, Oracle and Wallmart will need approval from the government in the US and China.

The US ban does not apply to TikTok outside of the US, so people in the UK will be able to download and update the app as normal.

320 comments
Back to top
unknown